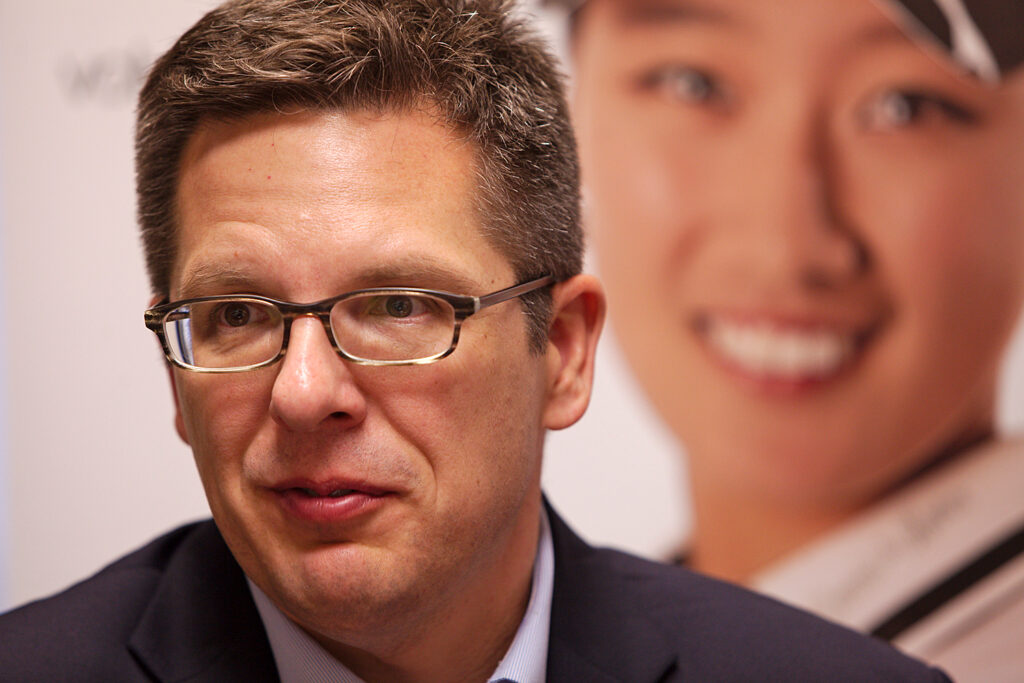 By Kim Clowes
Mark your calendars: world-class professional golf is hitting the region early this summer.  Get ready for the inaugural LPGA Volvik Championship, which debuts May 26th and runs until May 29th at the Travis Pointe Country Club in Ann Arbor.  It’ll be the first pro tournament happening on an annual basis in south-east Michigan since 2009.  LPGA Volvik Championship director Keith Karbo is enthusiastic about the opportunity and cites the character of the city, the multi-cultural and international flavour of Ann Arbor, as an important factor in helping to attract an international event of this calibre.
The tournament’s primary corporate sponsor will be Volvik, the South Korean company best known for their uniquely bright and colorful golf balls.  The company’s name comes from the Italian word ‘Valera’ or ‘Flying High’, and with a three-year deal inked last year to become the inaugural sponsor of the new tournament,  the company has high sights on increasing brand awareness and an increased global market share.  Their sponsorship of the tournament is likely to achieve just that.

Keith Karbo reflects on how Volvik’s involvement came about:  “We were looking for a sponsor and Commissioner Michael Whan from the LPGA said ‘Hey, based on your geographic location and based on (my) relationship with Volvik and what they’d like to do in the golf industry, this might be an excellent match.”  Karbo also credits Volvik USA President Don Shin and Volvik Chairman Kyung-ahn Moon’s vision for their company, and their commitment to the production and marketing of a high quality product, as important factors in establishing the partnership.  “Understanding their products, and seeing those products up close, they instantaneously legitimized us as a professional golf tournament.  They’re the only manufacturer who are a title sponsor and we feel very proud to be able to carry that flag for them.”

Volvik USA President Don Shin laughs when remembering how quickly the deal to sponsor the tournament occurred.  “We actually signed off on the deal within 48 hours.  Usually it’s months or years of discussions and planning.  With Keith’s vision, and how he wanted to put together a great local and global tournament here in Michigan, it was a great opportunity for us to step up our game and share our story.  We turned it around in 48 hours and the rest is history.”
In terms of community engagement, besides the ‘pure golf’ one might expect to find at an LPGA tournament, Karbo says that event organizers are developing some special initiatives to make the LPGA Volvik Championship stand out from other golf events and engage both fans and non-fans alike.  “We’re planning to create some fun and exciting areas around the golf course: for photo opportunities, for autographs, for hospitality. No matter what you like to do,  there’ll be something fun for you to do at the tournament.”
Karbo is also proud of the LPGA Volvik Championship’s charitable associations: “Our lead charity this year is the National Network of Depression Centers (NNDC).  It was born out of the University of Michigan Health System here with the U of M Comprehensive Depression Center.  One reason why we chose that program is that the tournament is played over the Memorial Day weekend, and they have specific programs that help military families.  Not only those who served in the military, but their spouses and children, too.  We think that’s a great opportunity.”
According to Karbo, the tournament will also bring a significant economic contribution to the region:  “As Commissioner Whan has stated, this should bring a 20 to 30 million dollar economic impact for the area. A prime example is that we have a great parking situation right next to Travis Pointe Country Club at the Washtenaw Farm Council Event Fair Grounds.  They’re a 501 3c not-for-profit so we’re renting their parking for the weekend.  It’ll be a short shuttle drive, less than minute, to get from the parking lot to the golf course.” Community awareness about the tournament is also rapidly increasing. “Tickets have been selling quickly not only in the state, but also in Illinois, Ohio, Pennsylvania and North Carolina.  The word is starting to spread.  More than 200 volunteers have already signed up and they hope to sign up as many as 750.  Although the core is here in Michigan, it is truly an international event.”
Keith Karbo says that event organizers are finding that there are plenty of champions in the community.  “No matter who we talk to, they seem to spread the word quickly for us.   We’re also stepping up our social media game.  But quite frankly, locally it’s word of mouth.  Whether we’re at the grocery store or a restaurant, no matter where it is, it seems like the attention paid to the event is growing stronger.”  Don Shin also acknowledges the importance of local support in helping to make the event a reality.  “I was at a press conference here back in October and the local support was incredible.  There were LPGA players here, and we went to the University of Michigan football stadium and hit some drivers.”  He’s also excited about the events’ upcoming impact on the region.  “It will be a festival for the local community.”
To find out more about the tournament, to buy tickets or to sign up to volunteer, visit http://www.volviklpga.com