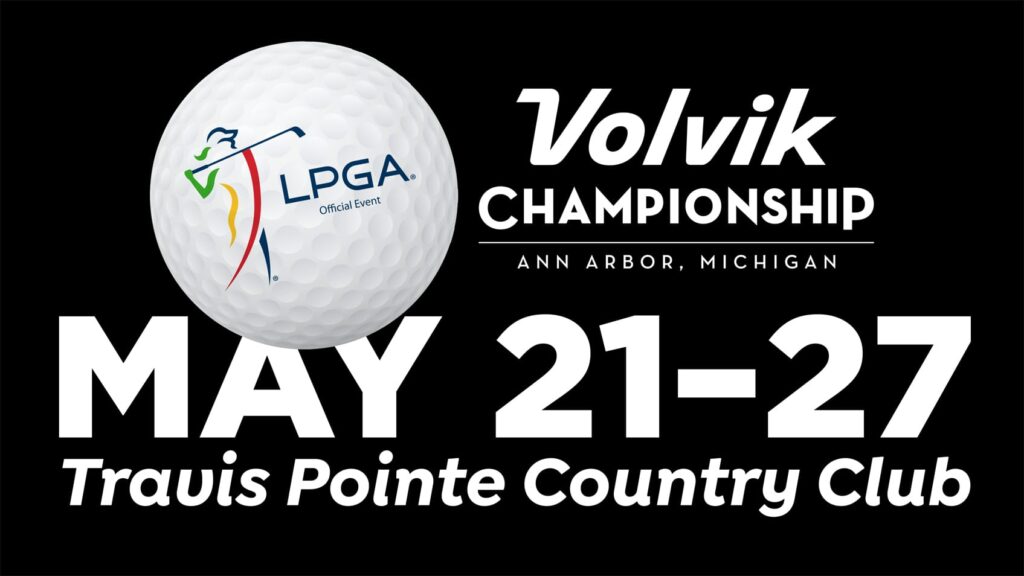 Star-studded field now includes local Michigander who never gave up on her dream and a 15-year-old phenom from South Korea
Volvik announces two young golfers with compelling stories as the two sponsor invites for the upcoming LPGA Volvik Championship, scheduled for May 23-29 at Travis Pointe Country Club in Ann Arbor.

Sarah Hoffman from Saline, Mich. and 15-year-old Korean amateur champion Ayean Cho will fill the exemption spots. Both players are playing Volvik golf balls, making 12 Volvik players expected at the Volvik Championship.
Sarah Hoffman grew up across the street from Travis Pointe Country Club, the home of the LPGA Volvik Championship. She used to ride her bike to the course and has been a member since she was five.
In February of this year, Hoffman decided to leave her job at University of Michigan hospital as a nurse in the orthopedic trauma unit, which she did for two years after graduating from Grand Valley State University, where she was a two-time All-American and won 11 events.
“I had already begun to regret not playing professionally,” said Hoffman, who was still playing in amateur events. “I was doing well in amateur events, and I was wondering ‘what if?’. I knew that ten to 15 years from now I was totally going to regret it (not turning pro).”
Hoffman quit her job and moved to Orlando to begin playing golf in a warmer climate. A week or so after the move, she was playing at the Waldorf Astoria Golf Course by herself and the foursome in front called her to join their group. As fate would have it, the group happened to include Volvik USA, President Don Shin. Also in that group was LPGA Hall of Fame golfer and Volvik staffer Se Ri Pak and former LA Dodger pitcher Chan Ho Park. Hoffman shot even par in the eight holes they played together, impressing the group.
By the end of February, that chance meeting led to Hoffman receiving a last-minute invite to the IOA Championship, the first event on the 2016 Symetra Tour, the LPGA’s developmental tour. After rushing to California at the last possible moment and without playing a practice round, Hoffman shot 74-77, just missing the cut.
Since then, Hoffman’s been playing on minor tours in Florida and preparing to be back at her home course for the LPGA Volvik Championship.
“The same month I quit my job I was playing a Symetra Tour event in California,” Hoffman said. “And then to receive the sponsor exemption is an absolute dream come true.”

Ayean Cho of South Korea, a 15-year-old phenom amateur golfer, has earned the other remaining sponsors invite for the LPGA Volvik Championship. Even at her young age, she has put together an impressive resume. She is a member of the Korean National Golf Team. She also finished runner-up at the 2016 Australian Master of the Amateurs, ranked by the R&A as the highest ranked Amateur Championship in Australia.
An article about Cho’s play at the Australian event praised the young golfer’s talent and performance at the January 2016 event: “There appears no end to Korean golf’s talent pipeline with two more of its finest qualifying for tomorrow’s Australian Amateur Championship women’s final. With rhythmic swings and deft hands around the greens, Ayean Cho, and Min-ji Park each finished their matches against astounded Australian opponents on the 15th green to set up an all-Korean finale on Sunday. Cho, in particular, was devastating.
She beat Perth and Australian No.1 Hannah Green 5&3 with near flawless golf, including almost holing out for eagle on what became the final hole. “I didn’t lose it, she was just brilliant,” Green said humbly. The Mt. Lawley ace was herself two under at the time, yet still five strokes behind Cho, remarkably only the 37th Korean in the world rankings.”
Cho was the low amateur finisher at the KLPGA Tour event hosted by Volvik, the YTN Volvik Championship. She finished T25 and took home Best Amateur Player honors at the event that took place in September of 2015. She finished ahead of several LPGA Tour players that were in the event. She shot a 66 in the first round, placing her in 3rd and a 68 in the second round. Her 75 in the third and final round dropped her to T25.
Other achievements for the young golfer include winning the 18th JaeJu State Team Championship, the 2015 Auckland Championship under 17 division winner in New Zealand, the 2015 Kunkuk University Championship winner – under 17 division, the under 17 division for the 2014 Korea Senior Tour Invitational winner and 5th place at the KJGA Amateur Championship. Cho turns 16-year-old in June.
Hoffman and Cho will be teeing it up with what will be a top-level field at the LPGA Volvik Championship. The first list of commitments included 12 of the top 15 ranked players in the world.
About Volvik
Volvik is the #1 Color Golf Ball on Tour with over 75 professionals using Volvik’s ultra high-performance color golf balls on the world’s professional tours.
Since 2012, players using Volvik golf balls have earned over $9 million in prize money on the PGA TOUR, LPGA Tour, Champions Tour, Web.com Tour, Ladies European Tour, LAGT and Symetra Tour with 14 victories and over 125 Top 10 finishes.

U.S. number of confirmed cases is declining… Be cautious about easing quarantine