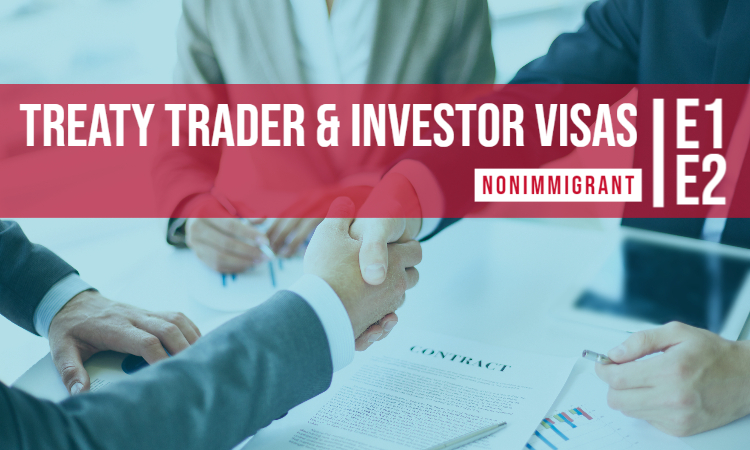 The E-1 Treaty Trader Visa: An Attractive Alternative to E-2?

The E-1 Treaty Trader visa allows Korean nationals to carry on business activities in the U.S.  The initial period of stay is 60 months, there is no limit on the number of extensions, and the visa does not require either monetary investment or job creation in the U.S.  Koreans who are considering applying for an E-2 for themselves or their employees might find it easier and less expensive to apply for the E-1.  Below we present information to help readers determine whether the E-1 is a good choice for them.

A first requirement is that an applicant for an E-1 be a national of a country with which the U.S. maintains a treaty allowing for commerce and navigation.  As South Korea and the U.S. have such an agreement in place, South Korean nationals meet his requirement.  In fact the initial period of stay for Koreans is 60 months, whereas for nationals of some other qualifying countries it is 24 months, 12 months or even less.

The second requirement is one many Koreans in the U.S. might easily meet:  substantial trade with Korea.  “Trade” is conducted when the E-1 trader (which may be an individual or an organization) sells goods or services from U.S. companies to Korean businesses; or sells goods or services from Korean companies to U.S. businesses. It is important that title to or ownership of the traded item pass from one country to another.  For example, if the E-1 trader sells goods produced in the U.S. to another U.S. company, even if the proceeds are placed in a bank account in Korea, no transfer has occurred.

However, there are many business activities that do entail the required element of exchange.  The business can be the individual’s own U.S.-based enterprise; or he/she can either head or be employed by a U.S. subsidiary or branch of a Korean company.   One example is a Korean national in the U.S. who buys American foods wholesale from U.S. manufacturers for sale to Korean specialty groceries and caterers. A second example is the U.S.-based distributor of a line of auto parts in manufactured by a Korean company.   The USCIS lists a variety of sectors where E-1 trade may occur including but not limited to goods, services, international banking, insurance, transportation, tourism, technology and technology transfer, and some news-gathering activities.

A third requirement is that the qualifying trade between the U.S. and Korea be “substantial.” The government looks at the number and value of transactions over time:  the strength of the case increases with higher numbers of larger transactions.   However, the visa is suitable for smaller businesses, since many transactions of modest value may still establish a “continuing course” of international trade.  It is a positive factor but by no means a requirement that the income derived be sufficient to support the E-1 visa holder and family.

In addition, for Koreans the international trade must be principally between the U.S. and South Korea. “Principally” means over 50%, and in measuring, business organization is important.  If the E-1 trader is an independent U.S.-based enterprise or a subsidiary of a Korean company, the total from which the 50% is calculated is the value of the yearly trade between the entity and its business partners. However, if the E-1 trader is a branch of a Korean company, it does not have a separate legal identity, and so “total” trade will be between the Korean parent and U.S. businesses.   If the parent company does most of its business with the U.S., this may pose no problem.  But if the parent is a large company with a high volume of international trade, it may not conduct 50% of its total trade with the U.S.

The nature of the relationship between U.S. and Korean entities is also important when the E-1 visa holder is an employee of the U.S. entity.  When the employer is not a branch, the allocation of the employee’s hours is not important.  Otherwise, at least 50% of his or time must be allocated to U.S.-Korea trade, and the parent company’s percentage of trade with the U.S. also becomes material. Thus, under the “substantial trade” rule a U.S.-based corporation or subsidiary has significant leeway to expand its business to other countries besides Korea and within the U.S domestically.  But the major trading partner (over 50% of trade) must remain South Korea.

A few other points to note regarding the E-1 Trader visa include that one may file from inside or outside the U.S., but the trading relationship must be established at the time of filing.  The E-1 cannot be used to search for trading partners.  And, although there is no maximum on the number of extensions that may be requested, it is not a “dual-intent” visa:  one must show nonimmigrant intent, and may not petition for permanent resident stats as an E-1 visa holder.

A qualified immigration attorney will be able to discuss paths to the E-1 as well as paths to permanent residence from the E-1.  He or she can help you decide whether this visa is a good choice for you.