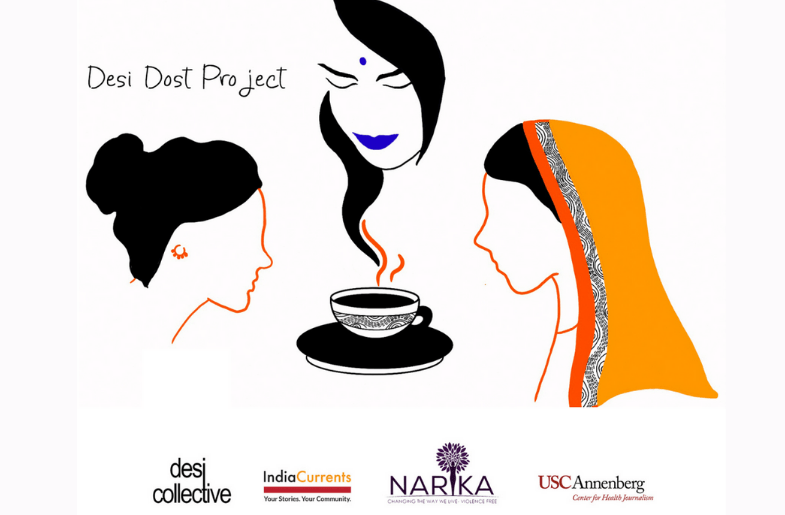 The DesiDost Project and Chai with Sahelis is a series on the impact of domestic abuse and transnational abandonment in the South Asian community, supported by the USC Center for Health Journalism and its 2021 Domestic Violence Reporting Fund, in partnership with Desi Collective, Narika, and India Currents.

As domestic violence spiked during the pandemic, a new form of violence against women – transnational abandonment – began to manifest in South Asian (SA) immigrant communities.

Transnational abandonment happens when abused immigrant women are abandoned in their country of origin by their husbands. It’s a phenomenon particularly prevalent in arranged marriages within the South Asian community, which views domestic violence as a taboo subject.

Narika, a 30-year-old, Fremont-based, advocacy group with 90% of South Asian clients connected to the Bay Area, reported a 3x increase in Domestic Violence (DV) calls to their Helpline since the pandemic began and documented 2 to 3 cases of transnational abandonment a week. Most survivors were H4 dependents of H-1B visa holders employed by Silicon Valley’s tech sector.

While the success of South Asians in the Silicon Valley tech sector gets a lot of ink, not much is written or known about the spouses of these tech workers who come on dependent visas. We decided to explore this phenomenon – and launched the Desi Dost Project.

Our stories revealed how these disposable women lose legal protections, rights to their homes, finances, and even children without adequate support networks or access to legal or financial resources.

We interviewed survivors, caseworkers, therapists, academics, and advocates, then added family law experts and immigration lawyers to the roster. Our research reviewed both US and Indian legal implications for abandoned foreign nationals. We interviewed 9 survivors and 12 experts over 5 months to build a clear picture of the issue and identified legal solutions (U Visas and VAWA provisions) to address abandonment issues and resources for survivors.

In a unique storytelling project, we produced Chai with Sahelis – three deeply personal audio stories told by survivors in their own voices. Hear their stories:

We also published two in-depth articles on the dynamics of DV, transnational abandonment, and hosted a community engagement event at Narika with survivors.

How Priya Won A Second Chance At Her American Dream: A Story of Transnational Abandonment
Priya became another victim of transnational abandonment when her abusive husband took her back to India and left her there. She fought back to rediscover her American dream.

How Anjali Got Her Son Back: A Story of Transnational Abandonment & Child Custody
Anjali Kour survived domestic violence and transnational abandonment to win back custody of her son in the US courts. But her life continues in legal limbo.

The investigation led to an exciting prospect to help abandoned DV survivors, the Grace Period for H4 Abused Women. This initiative will become Phase 2 of our project – a campaign to approach lawmakers to take action and support a provision in US Immigration law called Temporary Protected Status (TPS), that is granted to eligible foreign nationals already in the United States and who face ‘extraordinary and temporary’ conditions’ if forced to return home. Victimization of women by transnational abandonment fits in this category. USC is providing mentoring and social media support to help amplify this project and has invited us to apply for a follow-up grant.

The stories were published on the India Currents website and social media platforms, USC Annenberg Center for Health Journalism, and on support networks of allies for expanded outreach.

This project was supported by a grant from the inaugural Impact Fund for Reporting on Domestic Violence offered by USC Annenberg Center for Health Journalism.  Our reporters (Meera Kymal and Anjana Nagarajan-Butaney ) were one of four teams invited from USC’s 2021 grantee cohort to present this project at the USC Advisory Board on Feb 1.

Women facing violence need proof that they can take control of their lives. Ultimately, we want these stories to shape the narrative and shift perceptions on what healthy relationships mean so that survivors in our community get the help they deserve.

Meera Kymal is the Contributing Editor at India Currents and a 2021 grantee from the USC Center for Health Journalism, reporting on domestic violence in the South Asian community.