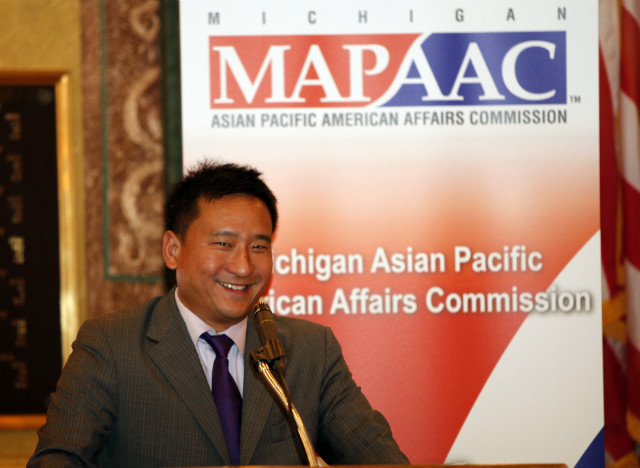 "Stand up and speak out, the squeaky wheel gets the grease"

At the Asian Heritage Month ceremony, which was held in the Capitol, many government officials and community leaders were in the audience. They were helping celebrate the growth of the State Asian Community.

For Asian Americans, it is time for us to stand up, to speak out, to assert that we are here to stay, we are equal with rights and responsibilities as we enter the Asian American century.

In 1941, Henry Luce, who was described as the most important private citizen in the United States, proclaimed the American century. Luce who founded the publishing empire anchored by Time Magazine, sought to encourage the United States to break out of isolationism, to engage in the world around it. What is little known about Henry Luce when he made that declaration as the most important private citizen in America, is that he had been born in China to missionary parents. Unlike so many others with origins as he had, he remained close to Asia. So, inspired by Henry Luce, I proclaim an Asian American century. President Barack Obama announced a pivot to Asia, a sense that in the emerging global economy, the future being here already, that we are connected across the Pacific as much as across the Atlantic. Asian Americans, whether immigrants or sixth generation Californians or even Michiganders, are no longer, in the words of historian Ronald Takaki, “strangers from a different shore.”  Know these shores belong to us as well.

So many of us call Detroit, Grand Rapids, Lansing, the Upper Peninsula our home having been born here and having grown up here knowing the traditions whether of the Motor City or of places such as Kalamazoo and elsewhere. This is where we belong. When we look at the relationships now, across the Pacific, I’m astonished. This change that is upon us, to be honest, I could not have anticipated, could not have predicted, as a child growing up in Canton, Michigan in the 1970’s. Canton, incidentally, was named from Canton, China. In the mid-19th century, there was a trend in the United States, especially in the Midwest, of naming small towns after Chinese cities, from the other side of the globe. In fact, earlier in Michigan’s history, next to Canton there was a Nanking and a Peking as well. Those names have fallen out of use, but if you go back to the history books and take a look, they were there.

So we’ve always had this connection, but now you recognize it as never before. When we look at the Asian investment that is pouring in to Motor City, revitalizing neighborhoods and businesses that are setting up shop because of engineering talent there, this is a type of change, demographic change, profound economic change, that will reshape what it means to be an American.

This morning when I woke up, I went for a walk as I like to do and right here again at the State Capital, I saw a poster at a Korean restaurant over in East Lansing advertising the Korean alcohol, Soju, that actually is the best selling liquor in the world if you can believe it. And what’s interesting about this poster is that it was in – Spanish. That’s America for you; that Asian drinks are advertised in the Midwest in Spanish. This is the world that we and our children and grandchildren are living in here.

It is up to us to embrace it, to ensure that it lives up to the principles that created the city upon a hill, a diverse democracy and unique experiment in human history that beckon with freedom and opportunity to our grandparents, our parents, and ourselves. When I think about this change, I know that it makes some people, anxious. I have the opportunity from time to time to give speeches to audiences such as this. I’m always honored, and privileged. Sometimes, after I’ve given a talk, someone, who isn’t Asian American, will come to me. Having heard that Asian Americans are now the fastest growing demographic within the nation and knowing that there are so many, whether adoptees or others, they will say that they are sympathetic, that they welcome me and my family, and that they believe in our civil right. However then in a moment of honesty, they’ll admit, that they’re a little worried. They’ll say, “You know, I don’t know if my grandchildren will be able to compete against your grandchildren.” The reply that I offer them, which I hope gives them comfort, is, “Don’t worry. Your grandchildren will be my grandchildren.” It takes them a moment to figure out what I’m saying by that, but that is indeed what is happening. Successive waves of Asian immigrants have come here as so many others before us, whether the Irish or the Italians, so many ethnic groups that have successively folded into this fabric, this tapestry, that we ourselves have also moved to.

And so what is most important as we celebrate this day, this month, is that we remember that it doesn’t happen by accident, it doesn’t happen automatically. The progress we have made that ensures that the stakes that my hometown is no longer remembered among Asian Americans, solely for the brutal killing of Vincent Chin in 1982, but instead we are able to celebrate what is positive, a sense of community and continuity and the optimism of the future. This has happened because of the hard work of all of you; through civic engagement, through participation, through voting, by running for office, by doing what our own ancestors would have discouraged in nations that did not practice democracy.

I close with this thought, every East Asian culture has an equivalent of the Japanese proverb, “The nail that sticks up is pounded down.”  There is a Chinese saying, “The loudest duck is shot first by the hunter.” What these adages are all about is conformity, fidelity to tradition, not making a fuss, minding your own business, keeping quiet, being passive. Compare that to the American saying, “The squeaky wheel gets the grease.”  Well, here, in our new home, whether we arrived recently or whether we have been here since our grandparents and great-grandparents opened a restaurant or a laundry, here we must embrace that American spirit, “The squeaky wheel gets the grease.” It’s up to us. Each of us, our families, our communities, to assert ourselves, to insist that we have a rightful place, and that we know that we must then contribute. That’s what has always made the State of Michigan a state that drew explorers and pioneers, and what will continue to make it great. I say to you, stand up and speak out.

Michigan Asian Pacific American Affairs Commission(MAPAAC) has 21 commissioners appointed by the Governor and they represent each Asian community. MAPAC moved from the Department of Civil Rights to LARA(Licensing and Regulatory Affairs) to focus more on the economic agenda.

More than 20,000 marshmallows will rain from the sky