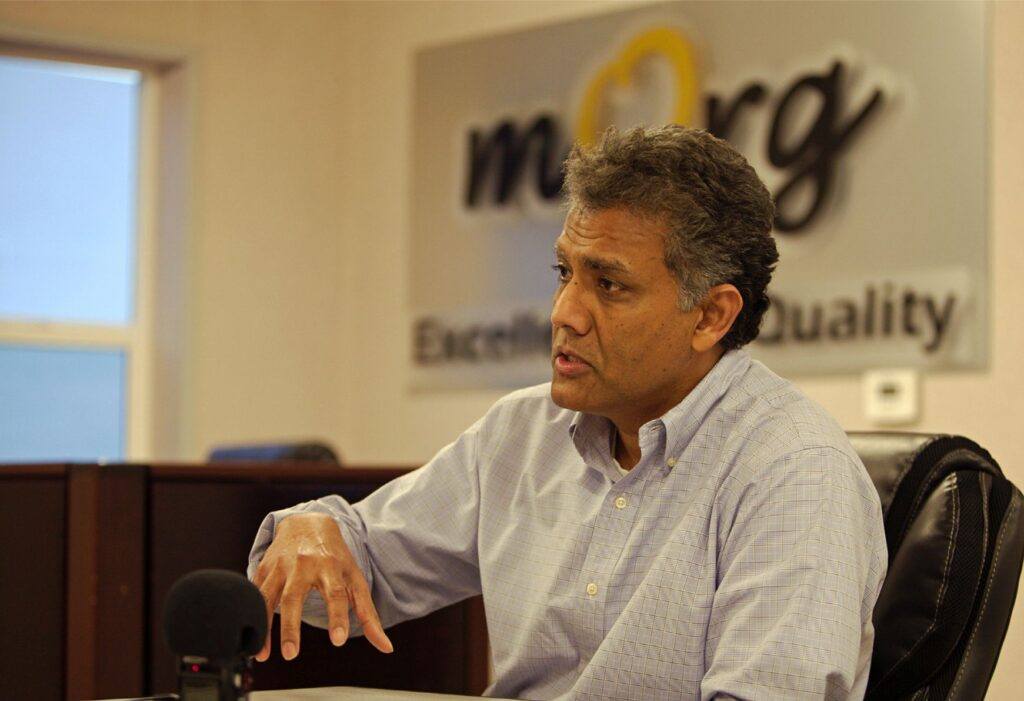 Proximity and Power in the Automotive Industry

South-west Detroit Location Key to MQRG’s Success
When a new vehicle comes off of the assembly line, sometimes it needs a little finessing before it’s ready for the showroom floor.  It could be a SUV with a slight imperfection in the exterior paint job or a botched stitching on the interior seating.  Maybe it’s a malfunctioning GPS system in a car or a faulty bulb in the taillight of a pick-up truck.  Whatever the problem, the solution can be found at the Manufacturing Quality Resources Group (mQrg, LLC) facility in south-east Detroit.
Located just miles from every vehicle assembly plant in the Greater Detroit Area,  mQrg is certified by the National Institute for Automotive Service Excellence and boasts Original Equipment Manufacturer (OEM) level technicians. The company has retrofitted more than 200,000 cars since its inception four years ago, focusing on diagnosis, heavy repair and the retrofit of all vehicle components with a focus on vehicle electronics.  With the success of the Detroit facility, mQrg has expanded into additional facilities in Flat Rock as well as out-of-state at the Port of Baltimore and the Port of Aberdeen.  These key locations in Maryland and Washington state allow for the export of new vehicles across the Atlantic and Pacific oceans.

The man behind the company’s success, CEO and owner Ehsan Taqbeem, says that mQrg’s role is to make sure that every vehicle is to the level that it should be before it goes to the dealership. A few of the examples of the kind of problems that his technicians come up against include engine issues, computer software that needs updating and exterior paint corrections.  The shop is located in an industrial sector of south-east Detroit.  “We are right next to the Jefferson auto plant.  This is where Dodge Durango and Jeep Grand Cherokee are being built for (distribution) all over the world.  This is the center.  We are located in what used to be Bud Stamping, on about 90 acres of land.  Next to us we have the railhead to ship cars all over the country.”
“Just to give you an idea of the space we’re in, it’s all retrofitting.  It’s all new cars.  They have to have the OEM specifications and what the customer is expecting.  But you also have to have (your finger on the pulse of) what’s coming your way.  We recognize that the trend is moving more towards electronics.  So we’re gearing towards the electronic side, whether it’s electric or autonomous cars.  We’re positioning ourselves towards servicing that area.  As you know, if you want to be in business you constantly have to re-invent yourself.”
Taqbeem brings a passion for cars to his work.  “After 25 years in automotives, I started with Chrsyler and then (moved) to Mercedez-Benz before starting my own company.  I’ve been playing with cars for years.”  He remembers when he got his first car. “(I was) in my late teens when I came from Bangladesh.  It was a Pontiac LeMans.  That car was ugly as hell!  I was a student, so it was a ’74 Lemans.  It was a gas-guzzler and it had very little space for occupants inside the car.  It was a coupe.”  He came to Michigan to attend school where he earned a degree in electrical engineering, and later an MBA from Wayne State.

His relationship with Chrysler goes back decades.  “Right after college I started at Chrsyler Engineering in Highland Park in 1988.  I joined the electrical group.  I was an electrical engineer so I started with E/E systems and compatibility.  That was my first gig.  Later I started doing program management, went into product strategy and then joined Mercedez-Benz (where) I was doing technology transfer from Mercedez to Chrsyler.”  The mQrg CEO believes that one significant advantage his company has over the competition is in its understanding of corporate culture.  “When I was at Chrysler, we were part of the Chrysler development system.   That means you go from A to Z, from concept to grave.  Having that understanding means knowing how to work with Chrsyler engineering and manufacturing.  At the end of the day we’re all in it together to make sure we send out good cars.”

What are some of the benefits for mQrg in operating out of Detroit?  Taqbeem cites Detroit’s reputation as the auto capital of the world, including the city’s proximity to suppliers, world-class universities and automotive OEMs.  “There is nowhere else you will find this within such a close proximity.  The mQrg business model is that this kind of business will never go to China.  It has to be in the market where you’re serving the vehicles.”  The city claims a rich institutional legacy.  Taqbeem believes that the connections between supply, distribution and research mean a lot for the region.  “You have the supply ability, you have the knowledge, you have the universities and you have the people.  I don’t think you can find any place besides Detroit that has this (concentration of) expertise and knowledge.  Detroit is probably the most heavily concentrated engineering community in the world.”  One challenge the company faces is in hiring new employees in today’s job market.  “The job market is very strong so we have to go outside sometimes to find talent.  Whatever talent we have, we want to retain them by giving them some incentives.  We are one of the few companies that provide free health care to our employees.”

Has being an Asian-American brought any special advantages or challenges to Taqbeem’s career in the automotive industry? “I wouldn’t say it provided any challenges.  If you’re an engineering student or an engineer, most of the engineers are minorities to begin with.  If you go to engineering school you see all foreign-born kids.  In the engineering community, most of them are minorities so I don’t see that as being any kind of roadblock.  Does that help?  Yes, it helps. Asians have a good track record.  But you still have to prove yourself, otherwise you don’t get recognized or promoted.  To me it’s neutral.  You don’t really see (any evidence of it) either way.”
Reflecting on his hopes for mQrg looking forward to 2017 and beyond, Taqbeem is optimistic.  “What I’d like to see is the same service that we provide for the auto industry moving into the food and drug industries.   There’s a lot of recall in the food and drug industries and the fundamentals are the same.” He sees mQrg’s previous experience with scalability as an asset.  “We start small, make it robust and then we can expand, either through duplication or quantity.  We can scale up or down.  We’d like to emulate the success that we’ve seen in the auto industry and take it to other industries.

Taqbeem urges new businesses starting out in the Greater Detroit Area to try to have a good understanding of the industry and to being a good value proposition to the marketplace.  “Detroit is at a turning point.” he says.  Whether in cyber security or anti-hacking for cars, or autonomous or connected vehicles, he believes that these kinds of new automotive security and technological issues can be dealt with locally.   “Since the recovery (began after) the recession, the U.S. has become a low-cost energy country.  A lot of manufacturing set-ups have been moved to Detroit because of low cost.”
Looking to the future, Taqbeem sees this low cost as helping to return the U.S. to its pre-globalization role as a good base for manufacturing in the car industry.  The success of mQrg, and the revitalization of the industry as a whole, is leading to a revitalization of the city.  “New car volume in North America has gone up.  Last year we saw a new record and we’re expecting another record this year.”   Taqbeem remains optimistic.  “These are positive things.  We’re seeing Detroit’s revival because of the auto industry.”