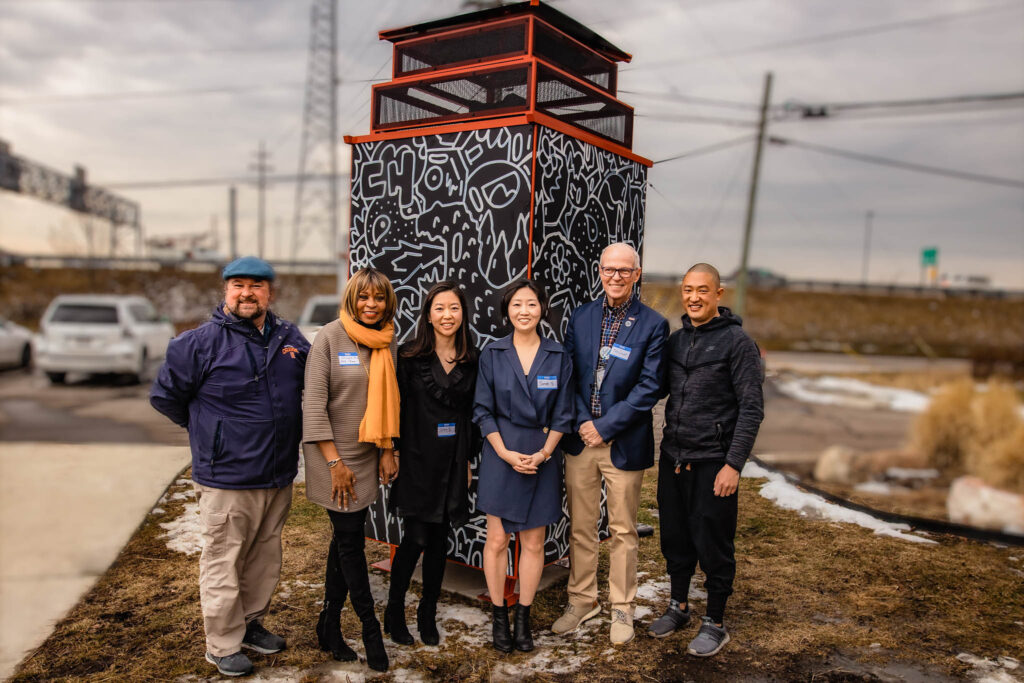 NSP, home of Daebak Korean BBQ and Myomee Cafe, is a family-run business established in 2018. Its mission is to enrich the Southeast Michigan community through an authentic Korean dining experience. In alignment with its mission, owners, Yong Yi, Kyoung Yi, Sarah Yi, and Lina Yi, sought to collaborate with an artist who could showcase the Korean American culture through a public art display. Through their quest, they discovered Mike Han, a NSP patron, whose artistic style intermixed his Korean American identity with his Detroit background. This combination made him the ideal candidate to carry out this project for NSP.

After a few months of collaboration, Han created a sculpture, named “Our House” or 우리집 (pronounced woo ri jib). The sculpture is inspired by a Korean traditional hanok architecture with Han’s signature linework on its four panels. The name “Our House” is also in reference to South Korea which is the home of many Korean Americans. Accordingly, each character of the word 대한민국 or Dae Han Min Guk, which translates to Republic of South Korea is written on one of the four panels of the sculpture. “I think Korea is always considered home in our hearts,” says Han, “And New Seoul Plaza is becoming the destination and gathering place for Korean Americans in Metro Detroit.”

Once the weather warms up, the sculpture will be connected with its built-in speaker by Leon Speakers, an Ann Arbor based custom speaker manufacturing company. The integration of sound and the physical is designed to enhance the sculpture’s appeal and encourage passersby to interact with it. “We hope that the artwork will spark interest in Asian awareness and inspire cultural conversations with our patrons,” says Lina Yi, Manager of NSP.

The 10-foot steel sculpture will be installed at the entrance of NSP. It is appropriate that the art unveiling will be held on a very special day in Asian culture, the Lunar New Year or Seollal in Korean on February 1, 2022. Through the artwork, NSP hopes to bring a strong awareness of Asian culture and its contributions to help shape America. An additional complementary artwork will be commissioned and displayed adjacent property at 27522 Northwestern Service Drive, which will be home to the New Seoul Market, an International Asian grocery store.

Mike Han is a Detroit artist, designer, and modern vandal. His work is inspired by Korean calligraphy, graffiti, and modernism. Han’s practice strives for balance, seeking to connect people, places, and ideas, through organic line-work.

Han has created artwork in Seoul South Korea, Osaka Japan, Wicker Park Chicago and throughout Metro Detroit. In 2021, Han was awarded an Art Prize Equity Grant and Red Bull House of Art Micro-grant in addition to collaborating with ArtLab J on a piece performed at the Detroit Institute of Arts.

Han has been commissioned to create art for Google for Startups, LinkedIn, vitaminwater, and has paintings in the permanent collection of Huntington Bank, and Henry Ford Health Systems. Han’s work has been featured on BBC World News, designboom, Cool Hunting, Apartment Therapy, and published in Detroit Home and the cover of SEEN Magazine. To learn more visit www.thehouseofhan.com or by following @mikehan_detroit on Instagram.

Leon brings a creative approach to the A/V industry by designing and manufacturing customizable speakers and technology concealment solutions that enhance the sound and style of any space. For almost 25 years, it has been a leader in the conversation on merging design with technology, creating innovative products that serve both the Residential and Commercial markets. Learn more at www.leonspeakers.com or by following @leonspeakers on social media.