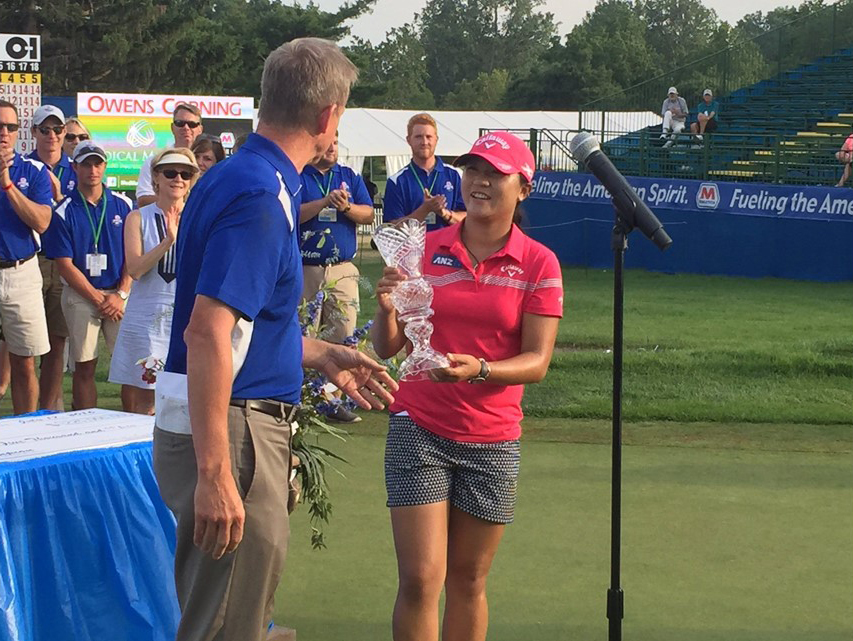 Lydia Ko pumped her fist emphatically after sinking the winning putt on the fourth playoff hole to emerge victorious over Ariya Jutanugarn and Mirim Lee at the Marathon Classic Presented by Owens Corning and O-I.
The trio traded pars on the 18th hole three times in what was the longest playoff of the season and in tournament history before Ko rolled in a putt for birdie that was almost exactly the same as her birdie putt on the third playoff hole.
“We all played and stuck to our game plans, and we all gave it a good run for it,” Ko said. “Our putts were so close and were not falling, and every time I said, hey, the ball is big enough for the hole — yeah, the hole is big enough for the ball. Right? Either way, it’s a long day. Yeah, so it’s been — it was hard to just see so many putts just slip by. I said, hey, maybe she’s going to win, and then it just slipped by; maybe I’m going to win, and it slipped by. To see that putt drop on the last hole was a cool feeling.”
Ko shot a 30 and built up a four-shot lead after nine holes on Sunday, but her 2-over 39 on the back nine allowed Jutanugarn and Lee to get back in the mix. Jutanugarn’s clutch eagle on 17 was enough to get her into the second playoff of her career.
“It was a really good experience, like I said,” Jutanugarn told reporters at the end of the day. “It’s really nice for me to have a chance in a playoff.”
Lee’s final round 65 was the lowest of the day and allowed her to move up from T6 to the top of the leaderboard. Without realizing it, the South Korean had actually taken the lead going into her final hole but closed with a bogey to move back to 14-under par.
“I didn’t know I’m in the lead,” Lee explained. “I don’t know, I just played, yeah. I didn’t think about the lead, just that I kept going, enjoyed playing.”
The 14th win of Ko’s career made her 4-for-5 in playoff scenarios overall, with the only loss coming earlier this season to World No. 2 Brooke Henderson in the KPMG Women’s PGA Championship. Ko now leads the Tour with four wins this season after capturing her second Marathon Classic title.
“Just a lot of great vibes,” said Ko. “I like Ohio. The people have been great, and even though — I mean, there are a lot of fans walking out there with us. I said, hey, it’s because Ms. Stacy is a hometown girl, but one of the fans said, no, we’ve come to watch you play. Just to hear that is pretty cool. Everyone has been super supportive, and they always support me coming back to this state.”
LYDIA KO – RECORD IN LAST FIVE EVENTS

Lydia Ko’s fellow Callaway ambassador Henrik Stenson captured his first career major championship early on Sunday in The Open Championship at Royal Troon. Ko said the two became friends after meeting one another at an outing last year and they trade congratulations messages to each other when the other one wins.
“I actually met him at an outing last year, and he was so open, super nice, and actually one of the funniest guys I’ve ever met,” Ko said. “I knew either way today was going to be a great day for Team Callaway. I know Phil had an amazing week, and I can’t believe he shot 6-under or something and ended up losing. I saw the coverage earlier on, and Henrik Stenson, his ball-striking was just amazing.”
“For both of them to hole those crucial putts is something that I learned. But I will send a congratulations message to Henrik Stenson. But they’re all top players, and I’m very proud to be alongside them for Team Callaway, and I think it’s been a fun day for all of us back at headquarters.”

Toledo’s own Stacy Lewis shot even par in her final round and finished alone in fifth, her best career result at the Marathon Classic. Lewis posted four birdies and four bogeys in what was her highest round of the week after three consecutive rounds in the 60s.
“I needed to get off to a good start, which I didn’t do, and that kind of set me back a little bit,” Lewis said. “But it was just keep working on what I was working on, and it was a little bit off today, kind of hit the irons a little bit left. That got me in couple a couple times. I really rallied there the last five or six holes, hit some really good shots and gave myself some good looks at birdie, and that’s always good when you get down to the end and more pressure, more people around to hit it better at the end than I did at the beginning is always good.”