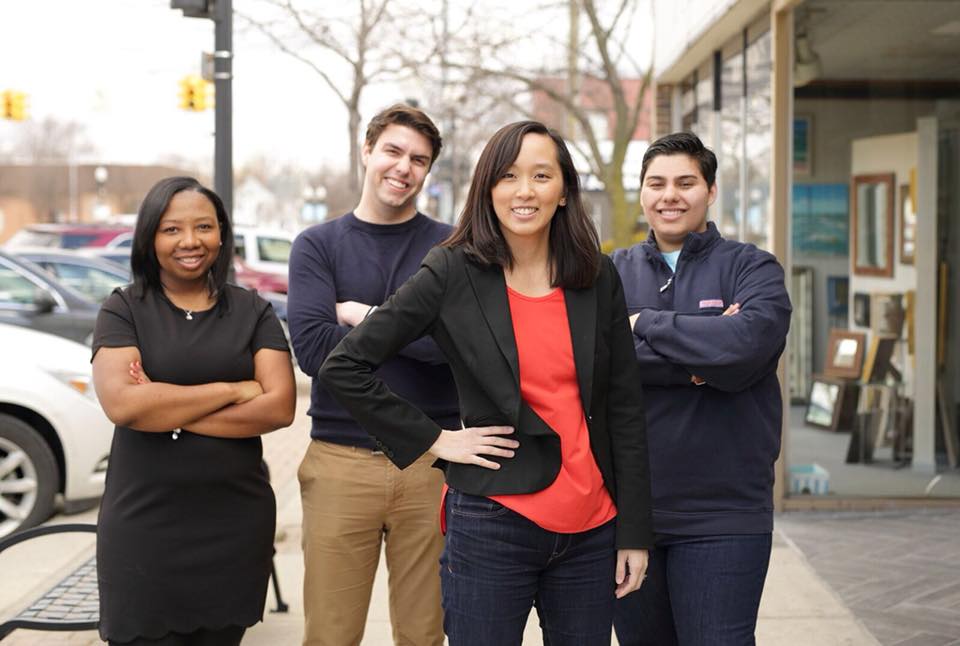 Lifting up all voices in metro Detroit, including Michigan’s Asian Americans and Pacific Islanders, for the 2018 midterm election

“It is so important that all voices are lifted up in our democracy, and that includes Asian American voters,” said Michigan Representative and Democratic state Senate candidate for District 1 Stephanie Chang. “There is so much at stake in the 2018 elections — from immigrants’ rights to an economy that works for everyone — Asian American voters should have a say in who will serve us in our representative democracy.”

As the 2018 midterm elections approach, Asian Americans and Pacific Islanders (AAPI) are making their presence known in Michigan, as an important group of voters and constituents not to be overlooked, and as candidates, elected officials, and campaign volunteers. Despite the challenges of civic engagement, AAPIs are concerned about issues facing all in Michigan.
According to AAPI Data, there are 161,006 eligible AAPI voters in Michigan, comprising 2 percent of the electorate. This may not seem like much at first, but it is a quickly growing demographic. From 2010 to 2016, the number of eligible AAPI voters in Michigan grew 31 percent. This contrasts to a 3 percent growth rate for the statewide eligible voting population during the same time period.
Furthermore, 44 percent of Michigan AAPIs are concentrated in three metro-Detroit counties, making up 6 percent (4 percent of citizen voting age population) of Oakland County, 3 percent (2 percent of citizen voting age population) of Wayne County, and 9 percent (5 percent of citizen voting age population) of Washtenaw County.
The largest AAPI ethnic groups in Michigan are Indian (112,368), Chinese (67,602), Filipino (40,847), Korean (32,893), and Japanese (20,883).

Getting out the vote
“With 2018 being such an important election year,” said Steffi Cao, nonprofit APIAVote-Michigan communications officer. “I think a lot more people want to focus on political power issues, accessibility, and getting issues on the ballot.

Despite persistent model minority myth stereotypes and increasing voting power, some of the challenges facing AAPIs in Michigan and across the nation include lack of outreach about the election, limited-English proficiency, and socioeconomic challenges like poverty and lack of health insurance. According to AAPI Data, 78 percent of Asian Americans in Michigan speak a language other than English at home, and of those, more than 42 percent speak English less than “very well.” Language matters because nationally, turnout for voters who have limited-English proficiency is 9 percent lower than voters who speak English well, and 63 percent say that Asian language support at polling places would be useful.

“Our Legislative Day is often popular among senior citizens as it provides them the opportunity to speak directly with their representatives about issues affecting them,” said Cao, noting that APIAVote-Michigan provides transportation so that senior citizens can participate. “Last year a big item on our agenda was access to the Department of Health and Human Services (DHHS), which I know impacted many non-English speaking voters and especially senior citizens.”
Many efforts have also targeted Muslim American voters, many of whom are also Asian American, including nonprofit organizations Michigan Muslim Community Council and MPower Change, and events like Michigan Muslim Capitol Day, My Muslim Vote Rally with guests Linda Sarsour and Alexandria Ocasio-Cortez, and National Muslim Voter Registration Day.

The candidates
“More participation from people of all backgrounds is important so that we can have a more representative government,” said Rep. Chang. “But it’s not just about numbers of representation — it is about shaping policy that matters and that will make long-lasting change for our communities.”

Asian Americans and Muslim Americans do not only have their sights set on the voting booth, this election season saw many running for office. According to the Detroit Free Press, at least 24 candidates running for elected office in southeastern Michigan in the August 7 primaries were immigrants or the children of immigrants, twelve of whom had roots in the Arab world and eight with roots in South Asia.

In Michigan’s closely-watched Democratic gubernatorial primary, Dr. Abdul El-Sayed came in second to Gretchen Whitmer with 30.2 percent of the vote, and Shri Thanendar won 17.7 percent of the vote. In another close race, former Michigan state representative Rashida Tlaib became the Democratic nominee for US Representative John Conyers Jr.’s 13th Congressional District seat and will run unopposed in November. Tlaib, along with Minnesota’s Ilhan Omar, are poised to become the first Muslim American women in the US House of Representatives.

Aware of the importance of representation, candidates nevertheless keep focused on the issues.

“I am running for the State Senate in District 1 so that I can do more good for more people,” said Rep. Chang. “I want to keep advancing our values of opportunity, access, equity and justice, and serving in the State Senate will allow me to do that. Our communities deserve someone who will work hard and continue getting things done — by being both a champion for progressive causes and someone who can work across the aisle to pass bipartisan legislation.”

While campaigning, Chang heard many concerns of voters in Senate District 1, which includes a lot of Detroit and the Downriver area, and said, “From Detroit residents, I hear about so many issues— car insurance, abandoned buildings, education, gentrification, air quality, clean drinking water, and more. Downriver, I heard about roads, schools, protecting our natural resources, car insurance and more. A lot of people also said ‘getting rid of Trump’ was one of the top things they wanted!”

“I have always volunteered in the community — it is the ultimate exercise in democracy, and I have worked to build the kind of community that I want for decades,” said Kuppa. “As the first woman in mechanical engineering in my college, I learned to take risks, to take on something that hasn’t been done before, to solve problems, and shift the paradigm. And when public education was placed at risk nationally (with the nomination of Devos to lead it), I realized that I needed to do something locally. After all, all politics is local.”
An additional part of her motivation for running for office is to set an example for her children in a landscape where there are few Asian American role models.

“We also say parenting is by example, by example, by example,” said Kuppa. “As a mother, I have always taken that to model for my kids what leadership looks like: if someone isn’t doing something that needs to be done, I roll up my sleeves, recruit a few friends, and just do it. Asian Americans, particularly women, are often hesitant to get involved in politics, because they lack role models. But we must be engaged in the civic arena, especially as elected officials, if we seek to have a more reflective, inclusive America.”

In Ann Arbor, Rebecca Lazarus is running for Ann Arbor Public School Board Trustee to improve education for all children by drawing upon the strengths and resources of all families.

“My parents raised me to believe that a good education is the key to success in life, no matter what you choose. My father always told me ‘people will try to take things from you, but no one can take knowledge away from you — so get a good education,’” said Lazarus. “Over the years, I’ve learned that most parents want the same things for their children, to attend a school with caring, passionate teachers, in a safe and clean environment, with equal access to high-quality resources that prepare them for life beyond graduation.”
Lazarus points out how her connection to the Asian American community will benefit all.

“As a Korean American, I will actively listen to our large Asian American community in Ann Arbor,” said Lazarus. “Asian Americans make-up the district’s second largest student population. And I believe this community is an untapped resource with unique concerns and perspectives on how our schools are run. Not only is there a tremendous richness in terms of language and culture, but also many of the cities and countries represented have advanced educational systems from which we should learn.”

Continuing challenges
Despite the long history of AAPIs in the United States and Michigan, they continue to face challenges being seen as Americans, whether they are candidates, legislators, voters, or even constituents.

This continuing challenge was called out by several groups during the August 7 primary election, when Michigan Rep. Bettie Cook Scott was overheard making racially offensive comments directed at Rep. Chang and her campaign volunteers. Scott reportedly called one of Chang’s campaign volunteers an “immigrant,” saying “you don’t belong here” and “I want you out of my country,” as well as telling another campaign’s volunteer not to vote for the “ching-chang” and telling multiple voters “Vote for me. Don’t vote for the ching-chong!”

Reps. Scott and Chang were both running for the Democratic nomination for Michigan State Senate District 1, which Chang won with 50 percent of the vote, compared to Scott’s 11 percent.

“In these times of rampant xenophobia, racism and intolerance, it is extremely disappointing to hear of an elected official speak to voters in this way,” said Aamina Ahmed, Executive Director of APIAVote-Michigan, said in a statement. “We all need to work together to combat prejudice, bias and systems of discrimination, not fall prey to them. We cannot let stereotyping and stigmatization become normalized by ignoring it. It is exceedingly upsetting to learn that the comments were made by a woman of color. We can build inclusive and cohesive communities that recognize diversity of all forms as a strength versus a weakness and hope that Rep. Scott apologizes and joins us in this work.”

Rep. Scott has since apologized and met with Rep. Chang over her comments, however some found her apology wanting.
“It is clear that Rep. Scott does not understand how harmful her words were” said Ahmed afterwards. “Elected officials must be held to basic standards of respecting ALL constituents and be willing to learn about those whose backgrounds or life experiences they may not be familiar with.”

Get involved
Despite the challenges, civic engagement can be rewarding at a variety of levels.

“I have taken on roles that are sometimes uncomfortable, and built relationships, bridged gaps and worked for a more inclusive community over the years,” said Kuppa. “On the campaign trail, canvassing is fun because I run into friends I have known for years.”
Finally, this advice from Rep. Chang for anyone wanting to get more involved, “Find a cause or nonprofit you believe in and volunteer or donate — no dollar amount of number of hours is too small.”

By Frances Kai-Hwa Wang
The Michigan Korean Weekly
About this series
New Michigan Media (NMM) is the collaboration of the five leading minority media outlets in the region. The New Michigan Media Newspapers have a combined estimated reach of over 140,000 weekly, and include The Latino Press, Michigan Chronicle, The Jewish News, The Michigan Korean Weekly, and The Arab American News.  For the past 3 years, NMM has also been a member of the Detroit Journalism Cooperative (DJC), the unique collaboration between some of the leading media outlets of the region, which includes The Center for Michigan’s Bridge Magazine, Detroit Public Television, Michigan Public Radio, and WDET. Funded by the John S. and James L. Knight Foundation, the DJC aims to report about and create community engagement opportunities in Detroit and the region. The article you are reading is part of the DJC project of this year, and will appear in all the NMM member newspapers, as well as with the DJC partners.