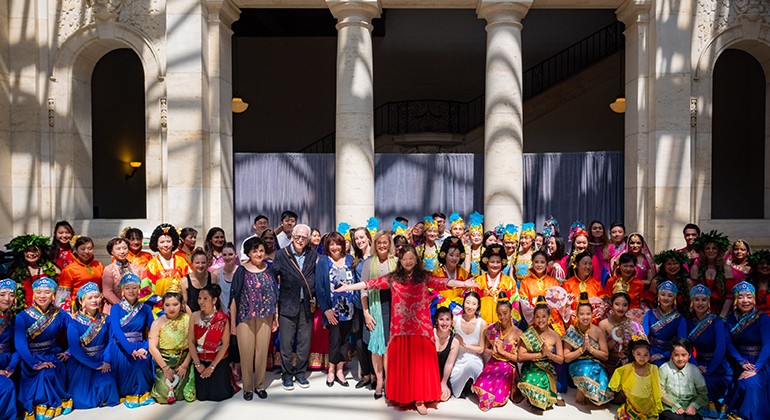 How Many Asians are HERE in Michigan?

Key facts about Asian Americans, a diverse and growing population

The U.S. Asian population is diverse. A record 22 million Asian Americans trace their roots to more than 20 countries in East and Southeast Asia and the Indian subcontinent, each with unique histories, cultures, languages and other characteristics.

The 19 largest Asian origin groups in the United States together account for 97% of the nation’s total Asian population. Below are key findings about these Americans. (This analysis includes all those who identify their race as Asian alone or as part of a multiracial background, regardless of Hispanic origin. It is accompanied by updated fact sheets that describe key demographic and economic characteristics of each of Asian origin group, as well as by another analysis that details the diversity of origins within the Asian American population.)

How we did this

The U.S. Asian population is projected to reach 46 million by 2060. In the 1870 census, roughly 63,000 individuals were classified as Asian by U.S. Census Bureau enumerators. By 1960, the first time census respondents could choose their own race, 980,000 individuals self-identified as Asian. The nation’s Asian population rose to 11.9 million by 2000 and then nearly doubled to 22.4 million by 2019 – an 88% increase within two decades. Asians now make up about 7% of the nation’s overall population, and their numbers are projected to surpass 46 million by 2060, nearly four times their current total. (In decennial censuses conducted in 1980 and earlier, Asian Americans and Pacific Islanders were reported as a single group.)

The single-race, non-Hispanic segment of the U.S. Asian population makes up a large majority (83%) of all Asians in the country. This population is also the nation’s fastest-growing racial or ethnic group. Between 2000 and 2019, their numbers grew by 81%, outpacing a 70% increase among Hispanics. The Black population grew by 20% during this span, while there was virtually no change in the White population.

Asian Hispanics, meanwhile, are the smallest segment of the nation’s Asian population. A 34% plurality of this group are Filipino.

Chinese Americans are the largest Asian origin group in the U.S., making up 24% of the Asian population, or 5.4 million people. The next two largest origin groups are Indian Americans, who account for 21% of the total (4.6 million people), and Filipinos, who account for 19% (or 4.2 million people). Those with roots in Vietnam (2.2 million), Korea (1.9 million) and Japan (1.5 million) each have a population of at least 1 million. The other 13 groups in this analysis account for 12% of all U.S. Asians, totaling 2.7 million people, with no one group surpassing 600,000. The remaining 3% of U.S. Asians provided other origins or indicated they are Asian but did not indicate a specific origin.

The modern immigration wave from Asia has accounted for a quarter of all immigrants who have arrived in the U.S. since 1965. But when and how Asian immigrants arrived in the U.S. varies, which helps explain why some Asian origin groups are more likely than others to be U.S. born. For example, immigrants account for only 27% of Japanese Americans, who began arriving in the 19th century as plantation workers in what is now the state of Hawaii. By contrast, many Bhutanese arrived recently as refugees, and a large majority (85%) are foreign born.

Asian Americans are projected to be the nation’s largest immigrant group by the middle of the century. Single-race, non-Hispanic Asians are projected to become the largest immigrant group in the country, surpassing Hispanics in 2055. By then, Asians are expected to make up 36% of all U.S. immigrants, while Hispanics will make up 34%, according to population projections from the Pew Research Center.

Overall, 72% of all U.S. Asians were “proficient” in English as of 2019, meaning they either spoke only English or spoke the language very well. Nearly all U.S.-born Asians (95%) were proficient in English, compared with 57% of foreign-born Asians.

About a third of U.S. Asians (34%) speak only English in their homes. The remaining 66% speak a language other than English at home. The most common of these is Chinese, including Mandarin and Cantonese, spoken by 34% of Asians at home. Hindi (13%) is the second most commonly spoken non-English language among Asians, followed by Tagalog and other Filipino languages (9%) and Vietnamese (7%).

Nearly two-thirds of U.S.-born Asians (65%) speak only English at home. Most Asian immigrants, by contrast, speak a language other than English at home. Chinese is the most commonly spoken language among the foreign-born Asian population (22%), followed by Hindi (18%).

About a quarter of Asian Americans (27%) live in multigenerational households. That’s comparable to the share among all immigrants in the U.S. (28%), but higher than the share among Americas overall (19%). Asians who are immigrants are slightly more likely than U.S.-born Asians to reside in households with multiple generations under one roof (29% vs 23%).

On the whole, Asian Americans do well on measures of economic well-being compared with the overall U.S. population, but this varies widely among Asian origin groups. In 2019, the median annual household income of households headed by Asian people was $85,800, compared with $61,800 among all U.S. households. Foreign-born Asian households earned slightly more than those headed by U.S.-born Asians ($88,000 vs. $85,000).

All told, 12 Asian origin groups had higher median household incomes than the median among all Americans.

Asians are less likely than Americans overall to live in poverty (10% vs. 13% as of 2019). Poverty rates among U.S.-born and foreign-born Asians were 9% and 11%, respectively, that year. The poverty rate among immigrant Asian minors – those under the age of 18 – was slightly higher, at 16%.

More than half of Asians ages 25 and older (54%) have a bachelor’s degree or more education, compared with 33% of the U.S. population in the same age range. Similar shares of U.S.-born (55%) and foreign-born Asians (54%) have earned a college degree. Both figures are substantially higher than the share of all U.S.-born people and all U.S. immigrants with a college degree (32% each).

Much like economic trends within the U.S. Asian population, there are wide disparities among origin groups. Indians ages 25 and older have the highest level of educational attainment among U.S. Asians, with 75% holding a bachelor’s degree or more in 2019. Bhutanese adults are the least likely Asian origin group to have a college degree (15%).

CORRECTION (Sept. 8, 2021): The figure originally reported for the 2019 Asian population is actually the number of responses of Asian groups to the American Community Survey question on race; individuals reporting more than one Asian group are counted multiple times. The Asian population, or the number of individuals choosing one or more Asian races, is 22.4 million in 2019. The findings in the report and chart “Asian population in U.S. nearly doubled between 2000 and 2019 and is projected to surpass 46 million by 2060” have been revised to reflect the population. The shares reporting specific Asian origin groups have been corrected to reflect the shares of the Asian population, rather than the shares of the Asian responses. No other findings in the report and fact sheets have been affected by these changes.