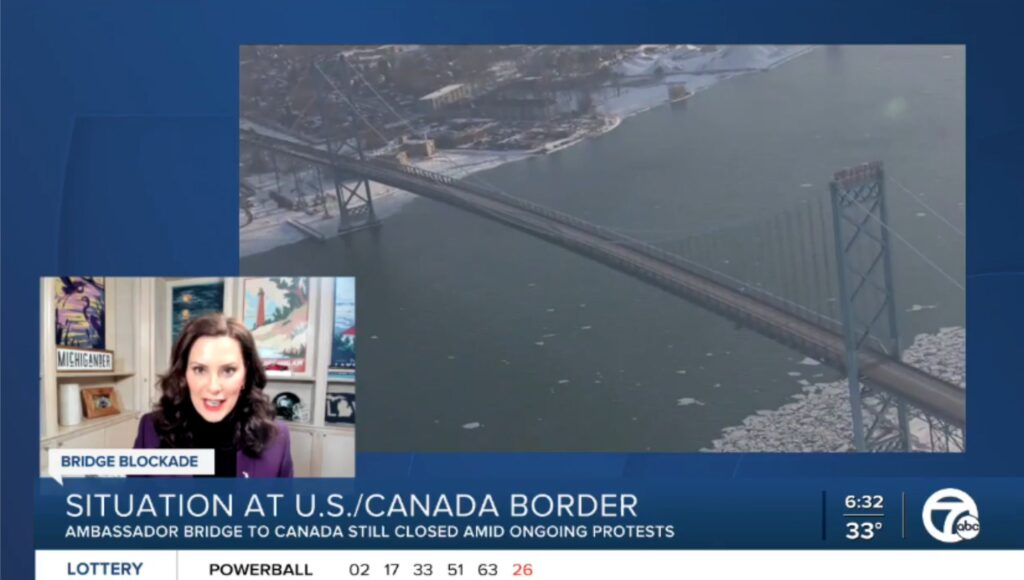 Gov. Whitmer on Illegal Blockade of Ambassador Bridge: “We are pushing the Canadian government to resolve this swiftly and safely.”

LANSING, Mich. – Governor Gretchen Whitmer appeared on WXYZ and CNN this morning to reiterate her call on Canadian officials to take all appropriate steps to swiftly and safely reopen traffic so we can keep growing Michigan’s economy, supporting good-paying jobs, and lowering costs for families.  Here is a link to her full interviews on WXYZ and CNN linked here.

On actions Governor Whitmer is taking to end the illegal blockade:

“I’ve obviously been burning up the phone line speaking with people from the White House to the Canadian ambassador to our congressional delegation, and some of the leadership in the Canadian government. We have got to push to resolve this and it has to be swift. And of course, we want it to be safely done as well. But it has to happen. We cannot let another minute go by unnecessarily because this border is too important to our economy, to our homeland security, and as we grow our economy, it’s a crucial moment.”

On the blockade’s economic impact on Michigan’s working families:

“Well, it’s never been just a Canada issue. It’s been hurting us in Michigan from day one. Every minute this goes on as lost wages and its damage to our businesses… Hundreds of millions of dollars a day are being lost, or Michiganders who are hardworking simply want to show up to their job and they’re out of work right now. This is having a huge impact. And we are pushing on the Canadian government to resolve this swiftly and safely because every minute this goes on it’s incredibly damaging to our economy and to our people.”

“So what I have said to everyone I’ve talked to is if there is a role for Michigan to play to be helpful and quickly and safely resolving this, we’re eager to know what that is and to step up, but at this juncture, it is on the Canadians to resolve this with the protesters…”

The Anderson Economic Group has pegged the total economic loss for working people and businesses in the automotive and transportation industry at $51 million this week due to this illegal blockade. The Michigan Department of Treasury estimates that 10,000 commercial vehicles cross the bridge each day with $325 million of goods. Approximately $50 million is from automotive parts. Nearly 30% of the annual trade between Michigan and Canada comes across the Ambassador Bridge.

WHO says what is the ‘longevity food’?

Get Ready for the 2016 Xperon Michigan Open Golf Event, Coming to Southeast Michigan this September