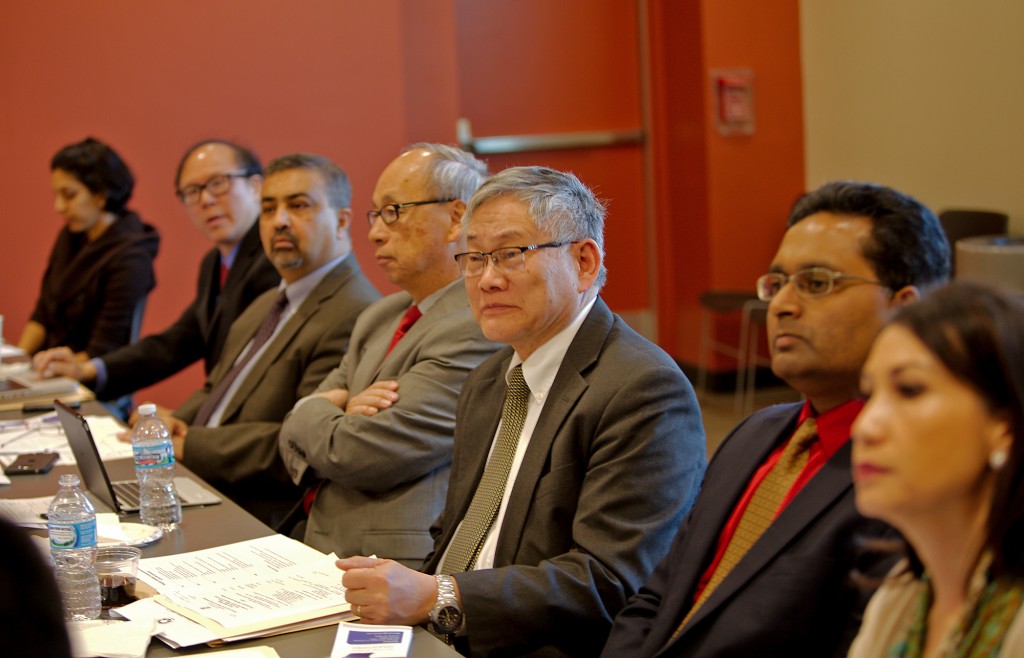 The number of Asian-Americans living in Michigan is rising, with the population increasing by more than 40% over the last 15 years.  In fact, Asian-Americans are the fastest-growing ethnic group in the Tri-County area of Metro Detroit, including Wayne, Oakland and Macomb counties.  Indian, Pakistani and Bangladeshi.  Korean, Japanese, Chinese and Taiwanese.  Filipino, Indonesian, Malaysian, Cambodian, Thai, Vietnamese and Laotian.  With as many as 44 countries-of-origin represented in Michigan’s Asian-American population, what does it mean for these sometimes culturally and linguistically disparate communities to speak with one voice?
Since 2009, the increasingly influential power of Michigan’s Asian-American community has been represented in the state House in Lansing through the work of the Michigan Asian Pacific American Affairs Commission.   MAPAAC’s mission statement dictates that the Commission exists to advance the full and equal participation of Asian Pacific Americans in the building of a greater Michigan.  Other mandated functions include the development of policies and plans of action to serve the needs of the community as well as playing an advisory role to the governor and the legislature on the state’s policies concerning the community.  The Commission also works to address issues of discrimination, harassment and equal access to education and state services.
Mi Asian Magazine spoke with two of MAPAAC’s commissioners at the organization’s quarterly meeting this March in Novi.   Commission Chairman Dr. Jamie Hsu says that MAPAAC’s mandate is to ensure that Michigan’s Asian Pacific-American community will have equal and full participation in the state’s affairs. “We don’t’ want them to be left out and we don’t want them to be discriminated against.  We want them to feel that they are a full member of Michigan.”  Commissioner Roland Hwang believes that the organization’s priorities lie in providing information to the community as well as in advising the office of the Governor and of the legislature.  “There are about 16 mandates that are in House Bill 61-72 that dictate what we’re supposed to be focusing on.  It’s a two-way street in respect to our role within the state.”
What is the Commission’s communication strategy?  “One of the Goals is that first we need to let people know the existence of MAPAAC.” says Hsu. “They have a place to go.  They have some issues, some concerns, they want to know something, they can have it.  We will be the conduit between the community and the state.”  In order to maximize community engagement, Hwang sees the Commission facing certain obstacles. “I think that we have to bear in mind how isolated some of the ethnic communities can be, so it’s good to have a commission that is able to have town halls that are tailored to those specific constituencies.  This is a way of getting the message out.  Through the commission we can have our town halls that are focused on these disparate communities that exist from shore to shore.”  “One of the beauties of the commissioners is that they’re all organizational leaders.” affirms Hsu.  “They really have the roots and their connections are very deep in the community.”
For MAPAAC’s 21 commissioners, 14 men and 7 women, representing different languages and economic backgrounds can lead to challenges in terms of communication.  One recent test that the Commission faced concerned explaining and clarifying details of the Affordable Care Act to their respective constituencies.  Hsu believes the Commission is becoming more effective at communicating.  “Sometimes the so-called common media communication of Facebook or e-mail might not work, so we have a lot of town hall meetings.  We go to the Bangladesh group, the Hmong group, the Chinese group, and speak in their language, to explain to them what Affordable Care is all about and answer their questions.”  Hwang notes the collegiality of the Commission members, and highlights the fact that different backgrounds and interests do not get in the way of working together. “It seems like people are able to gravitate to their areas of interest whether they are business people or entrepreneurs, if they are attorneys that have an interest in civil liberties.  They all have their niche and it all comes together as a pretty collegial group representing the interests of the Asian-American community.”

What does it mean for MAPAAC’s commissioners to act as a liaison between state government and their communities?  According to Hsu, “To me personally, I see the commissioners growing out of their comfort zone.  (They are) more willing to stick their necks out, more willing to do something, and that’s contagious.  They influence their organizations and their ethnic group. We really want people to feel that they are part of Michigan and that they want to participate.”  Hwang suggests that ethnic commissions are created as an effort to give voice to those communities that have been historically under-represented in law enforcement, government employment and education.
Both men agree that engaging the media will play a big role in broadening awareness of MAPAAC’s mission. “I think that’s one of the weaknesses we have, and that’s why we’re focusing on a communications strategy.” says Hsu. “That’s why we really appreciate the opportunity to talk to (Mi.Asian Magazine).  We’ve been busy forming MAPAAC and deciding what we want to do.  (We’ve) focused on getting started, but we have not systematically approached the media to become our partner.”  Hwang says that they have reached out, to a degree. “I think we’ve had instances where we have been able to get our word out to the ethnic press, whether it’s The Filipino Star, The Michigan Korean Weekly or The Chinese News.  I guess the question is- what’s the next step?  Certainly we do have links to michigan.gov, but how many people actually go to those websites?”

Looking forward into 2016 and beyond, the organization has some long-term goals.  Dr. Hsu, who is on the board of the Henry Ford Health System, says that one specific concern of the community surprised him. “I have doctors and nurses approach me and say “Professionally, we have no problem.  But we don’t know how to deal with the patient culturally. We know how to do a lot of things in America, in Michigan.  Professionally we know how to do it.  But we don’t’ know how to deal with the culture.  MAPAAC, can you help us to learn that?”  Hsu stresses the broader community objective: “We want to become truly part of the mainstream.  We don’t want to always be looked upon as a minority on the sideline. So how to do that?  I think that should be our ultimate goal.”
To learn more about MAPAAC or to stay up to date on the commission’s activities look for them on Facebook or check out  their online government portal under the Michigan Department of Civil Rights at MDC/other commissions/Asian Pacific American Affairs Commission.

You are welcomed to 2018 UAAMSA Health Fair