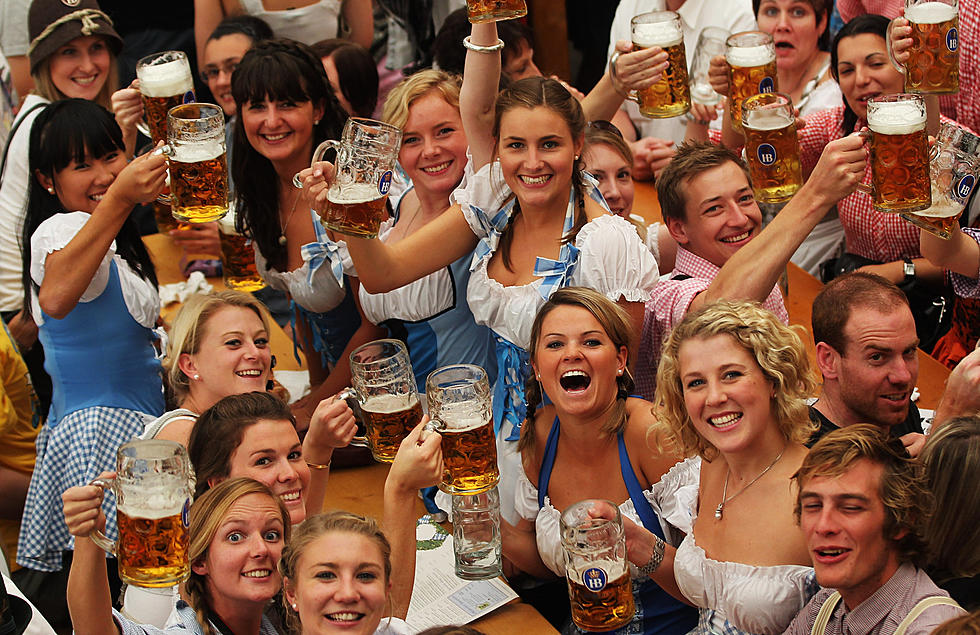 In preparation for this year’s Bavarian Festival weekend, Jackson Kuczynski will rise early on his assigned workday and slip on his lederhosen. The energetic nine-year-old from Frankenmuth volunteers at the Jaycees barbecue chicken booth. “Last year, my job was to season the chicken using lots of secret seasonings,” he said.

For the past four years, Jackson has proudly worn his sheepskin shorts with suspenders to the event. “I like to show my German side because everyone can be German during the festival!”
Christy Kuczynski of Frankenmuth, Jackson’s mom, agrees. “One of the best things about the festival is the celebration of heritage,” she said. “During the festival, you will hear folks singing the Ein Prosit (a German song), and, raising a glass in Prost! (Cheers!) to their friends and families.”

Kuczynski talked about “…a mood of joy, laughter and love” that townsfolk exude during the celebration. “The fun, old-timey atmosphere makes for the best festival experiences around, as everyone is a little jollier. Of course, the giant steins of beer some people are chugging probably help too!” Like many of her female festival friends, Kuczynski will wear a dirndl, a dress with full skirt and close-fitting bodice.

The indoor-outdoor event takes place at Heritage Park, a two-minute trek from the town’s Main Street, just across the Holz Brucke (covered bridge). NOTE TO EDITOR: The letter “u” in Brucke should have an umlaut – two dots, (¨) over it.

As visitors meander into the park, an upbeat mix of polka and jazz tunes, squeals and laughter from the midway, and, wafts of enticing edibles engulf their senses.

The Raising of the Maibaum (maypole), the hoisting up of a 15-20 foot, pine tree pole, takes place on Friday, June 10. Other highlights include Maibaum dancers, a festival princess coronation, cornhole tournament and Festival Olympics.

Sand sculptures – from creatures and cameras to pigs in space and alien archeological digs – are a hit at the Sand Carving Competition. Artist Stephen Hargash has overheard kids telling their parents, “I want to do that!” Youngsters are thrilled when they discover that ‘Yes, they can carve!’ at the free onsite workshop. “The kids use small plastic shovels – just like we do – to carve whatever they want with the sand,” said Hargash of Frankenmuth.
H

ankering for German chow? Amble on over to the Lions Haus to order a brat, with or without sauerkraut; German potato salad; or, Jager Schnitzel, a breaded, seasoned veal cutlet topped with mushroom gravy.

NOTE TO EDITOR: The letter “a” in Jager should have an umlaut – two dots, (¨) over it. Traditional carnival fare, like hot dogs, burgers and fries are also on the menu.

Watch for strolling Rotary Club members selling Bavarian-style pretzels. Best way to enjoy the knot-shaped-topped-with-salt doughy treats? “Spread yellow mustard on the pretzel and wash down with a cold beer!” suggested Jerry Thompson of Frankenmuth, a festival past president.

One beer option is the Bavarian Brunette Dunkelweizen, made exclusively for the festival by Frankenmuth Brewery. NOTE TO EDITOR: The letter “u” in Brunette should have an umlaut – two dots, (¨) over it. The restaurant/brewery, situated on Main Street, will also serve ale and several lagers. “It wouldn’t be a festival, if there wasn’t beer!” said Thompson.

Main Street will host two parades: a Kinder Tag parade on June 11, and, on June 12, the Bavarian Parade features the newly crowned princess and her court, marching bands and entertainers. Emergency vehicles, like police cars and fire trucks, and, the mounted sheriff’s patrol on horses, are young Jackson’s “favorite things in the ‘big’ parade.”

Shirley Arnold of Waterford, MI, a frequent festivalgoer who attends with family members, said, “We all love it! It’s great for families.” Arnold and crew also enjoy non-festival activities, like a cruise on the Bavarian Belle.

“The ride on the paddle wheeler was very relaxing. Our guide talked about the history of Frankenmuth, the covered bridge, the century-plus flour plant, and lots more,” Arnold recalled. The Belle offers riverboat rides through mid-October.

Weekend wanderers and day-trippers alike – during festival time or not – relish the laidback ambiance of Michigan’s Little Bavaria.

On a mini-excursion to the town, Cathy Diroff celebrated her 60th birthday with her mom and two sisters. “I’ve always had a really good time in Frankenmuth,” says Diroff of Sarasota, Florida.

Bronner’s, billed as the World’s Largest Christmas Store, impressed Diroff. “I really liked the nativity scenes, decorated Christmas trees and the variety of ornaments,” she said. Browsing Main Street shops, savoring a chicken dinner with all the trimmings at Zehnder’s Restaurant, and, an after-dusk jaunt in a horse-drawn carriage were happy highlights of her getaway.

“Coming to Frankenmuth is a tradition that stems multiple generations for many families. In recent years, many choose to visit for the fun. Frankenmuth is widely known for being Michigan’s Little Bavaria because of the town’s rich cultural history and the unique architecture that sets the stage for a special experience,” said Jamie Furbush, president/CEO, Frankenmuth Chamber of Commerce and Convention & Visitors Bureau.

If you go
What:  Frankenmuth Bavarian Festival
When: Thursday, June 9 through Sunday, June 12. Hours vary.
Where: Heritage Park, 601 Weiss Street, Frankenmuth, MI
Cost: $7 ages 13 and older; free for kids 12 and younger; free parking
Information: www.bavarianfestival.org
For information on lodging, restaurants and events in Frankenmuth, contact the Frankenmuth Chamber of Commerce and Convention & Visitors Bureau at 800-FUN-TOWN or go online to: www.frankenmuth.org.

Mary Quinley is a freelance journalist from Metro Detroit.

FARMER’S MARKETS around us