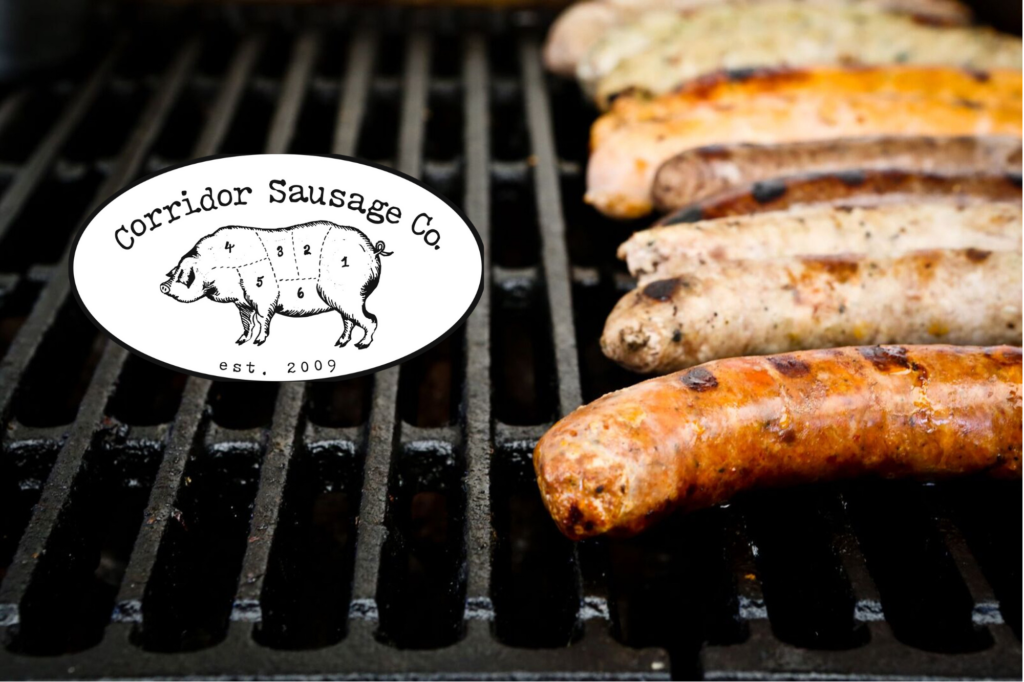 Will Branch didn’t expect his Vietnamese Chicken sausage to be quite as popular as it is with his customers at Eastern Market, but from day-one, the Southeast Asian-inspired link has been their best seller by a wide margin. Customers might never have been exposed to lemongrass, galangal, kaffir lime, or fish sauce, but the use of fresh flavors with roots in cultural tradition seems to be working for Will and the Corridor Sausage Company.
Chinese-American on his mother’s side, Will’s heritage has inspired more than his choice of aromatics. A passion for high-quality food runs on this side of the family. Growing up, cooking and eating played a central role in get-togethers. Back in the eighties and nineties, growing up in Warren, Will says, there wasn’t much in terms of Asian cuisine. “Every time something new opened, my mom was really excited to take us there. And when we were in New York visiting family, we’d always go to Flushing. I got the flavors I was used to, flavors I loved.”
A few years out of college, Will found himself in a desk-job, feeling restless, and looking around for a way to do work that he loved and build something meaningful. He narrowed down his options and in the end, his passion for high-quality food instilled by family, inspired a decision to choose culinary school over law school. The food world with its long hours, fast-pace, and physical demands, also appealed as a place where Will could channel his relentless energy. It made sense, Will says. “I’m hyper-competitive, athletic Asian.” Though, he laughs, “not so good at math.”

In 2008, after culinary school and apprenticeships in high-end kitchens in New York, Will ended up back in Detroit at the Whitney in Midtown. At the time, he thought the job would be a quick stop on his way back to New York. But shortly after, he met his now-partner, Zachary Klein. They started experimenting with charcuterie specials at the restaurant, then making sausage for chef friends, then selling at farmers markets. The company grew over the next three years and just this June, after years of searching, Corridor Sausage Co. (now made up of a core team of Zach, Will, and Will’s wife, Lori) finally signed a lease on its first production facility in the city-proper. The 8,500 square feet of commercial space in the Eastern Market district will allow them to quintuple production in the next year and eventually expand to serve larger regional markets.
With experience, professional connections, and a large chunk of family in New York, why did Will choose to stay here in Detroit? Will has no pie-in-the-sky pretensions about the city. “I just thought it made sense to be in the city,” he says. With the rich history of food processing companies in Detroit and Hamtramck, he thought it would be easy to find a facility, but after a few discouraging years of poorly maintained spaces, inappropriately high rental rates, and trouble lining up the capital for equipment and improvements, he was close to giving up and heading out. But then he was tipped off to their current space by one of the founders of the Detroit Institute of Bagels. These kinds of relationships and collaboration in the food community are one of the reasons he stayed and one of the reasons that he has hope for the city.
Still, he says “it’s not that there’s a shortage of brilliant, ambitious people, but with the economic structure, it’s really hard. For every awesome person coming in or doing something great, there are ten people leaving.” With chefs in particular, Will says, much more could be done to cultivate and keep young talent by building a culture of good food in the city through an emphasis on high quality and innovation.
He’s doing his part to build the movement through the Corridor Sausage Co. The company continues to emphasize fresh (rather than dried or powdered) herbs and aromatics, and high quality meats and other ingredients. This allows them to play up flavors that are usually lost in mass production. Their recipes are often inspired by traditional dishes like the Moroccan Lamb and Fig, or are personal takes on traditional sausage flavors, like the Lamb Merguez which was inspired by a transcendent experience eating Merguez and cheese crepes on the streets of Paris.
In the meantime, Will recognizes the small relative size of Detroit’s good food movement as an opportunity. “If we did this in Brooklyn or Portland, we’d be one of 100 doing it,” he says. “Here, you’re the person laying the groundwork. You have room to do more than just make sausage. You can bring attention to the city. And, I’m not going to lie, boost your company’s profile a little bit. But there’s more skin in the game doing it here I guess.”
Despite his self-diagnosed hyper-competitiveness, for Will, part of “doing more” has been teaching and mentoring other would-be good food entrepreneurs informally and through his connection with FoodLab Detroit. “I can contribute, I can teach here. I can be part of a community, a movement. Who wants to just follow a trend somewhere else?”

Corridor Sausage Co.
Corridor Sausage Co. was founded in 2009 by Zachary Klein and Will Branch to bring handcrafted and artisan meats to the Detroit market. We are committed to using all-natural, hormone- and antibiotic-free proteins as well as only fresh herbs and spices, never any dry or pre-made mixes. Our products blend old world cooking technique with our own unique twists.