The number of females in the U.S. as of July 2014. The number of males was 157.0 million.
Source: Annual Estimates of the Resident Population for Selected Age Groups by Sex for the United States, States, Counties, and Puerto Rico Commonwealth and Municipios: April 1, 2010 to July 1, 2014

At 85 and older, the approximate ratio by which women outnumbered men in 2014 (4.1 million to 2.1 million).
Source: Annual Estimates of the Resident Population for Selected Age Groups by Sex for the United States, States, Counties, and Puerto Rico Commonwealth and Municipios: April 1, 2010 to July 1, 2014 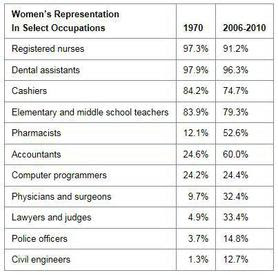 Percentage of employed women 16 and over in 2014 who worked in management, business and financial occupations, compared with 15.6 percent of employed men in the same year.
Source: 2014 American Community Survey 1-Year Estimates, Table B24010

Number of women veterans in the United States in 2014.
Click here for table.

Percentage of female citizens 18 and older who reported voting in the 2014 election. By comparison, 40.8 percent of their male counterparts reported voting.

Number of married women 18 and older (including those who were separated or had an absent spouse) in 2015.

The amount that female year-round, full-time workers earned in 2014 for every dollar their male counterparts earned.

Estimated percent of U.S. firms that were owned by women in 2012. They constituted the majority of firms in the health care and social assistance sector (62.5 percent), the educational services sector (54.2 percent) and the “other services” sector (51.8 percent). For comparison, women accounted for 51.4 percent of the 18-and-older population in the U.S. in 2012.

AMERICAN PICKERS to Film in Michigan