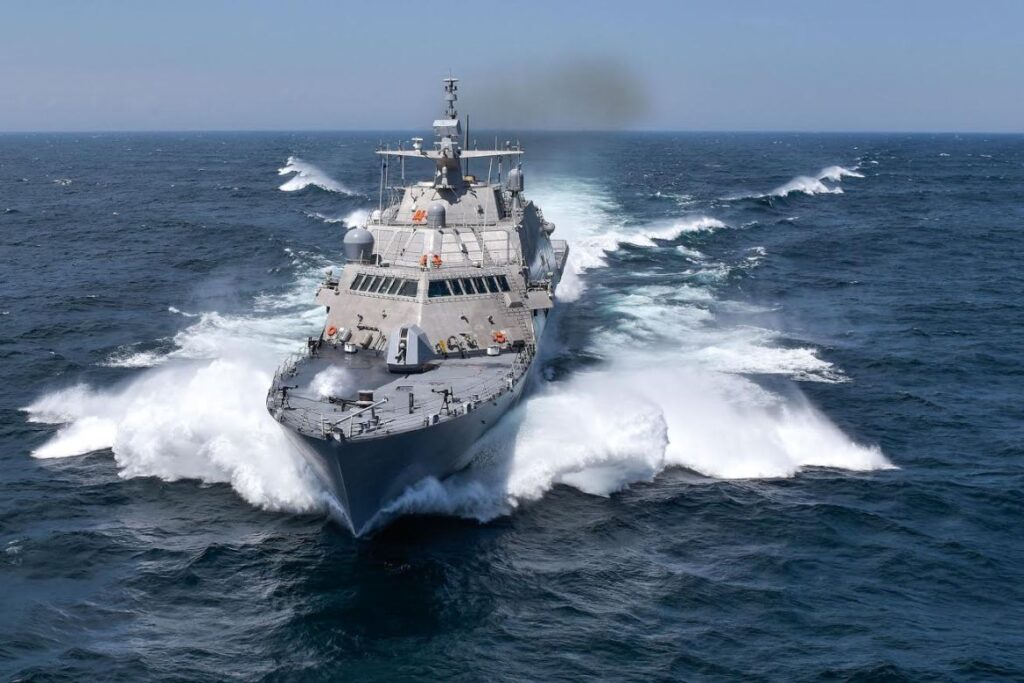 The first USS Detroit started life as HMS Detroit of the British Royal Navy. In 1813, about 50 miles from Detroit, in Lake Erie, she was surrendered to the US Navy after the famous Battle of Lake Erie. She was broken up in 1825. The second USS Detroit was a screw-driven steamer that was laid down in 1865, but was broken up in 1866 as the end of the U.S. Civil War decreased the need for ships. The third ship of the name was a sloop of war, holding the name from May through August 1869, before being renamed USS Canandaigua. The fourth USS Detroit saw active service as a cruiser in commission from 1893 to 1905.

She was active during the Spanish American War and protected U.S. interests throughout Central and South America. The fifth USS Detroit was a light cruiser commissioned in 1923 and serving until 1946. Since it was obsolete by the time the US entered World War II, she spent most of the war in the far northern Pacific Ocean. She is one of only two ships to be present at both Pearl Harbor and Tokyo Bay, marking the beginning and ending of war for the U.S. In 1970 the fifth USS Detroit was placed in service as a fast replenishment ship. She was large, fast and capable of supplying food, mail, repair parts and fuel to an entire navy aircraft carrier battlegroup.  She was decommissioned in 2005.

The sixth USS Detroit will be a littoral combat ship, a 2200-ton vessel capable of operating both at sea and inshore. The littoral combat ship is a multi-mission ship capable of conducting anti-submarine, anti-surface ship, anti-mine warfare and supporting special operations forces. She is designed for a very small crew of between 50 and 100 personnel. One unique aspect of the ship is that it will have multiple crews. Two LCS ships will have three crews. With one crew and ship forward deployed, one crew and ship doing drills and making preparations for deployment and one crew training and reconstituting.

Some general characteristics of the ship are:
Length:  378 feet (115 m)
Beam:  57 feet (17 m)
Displacement:  2862 tons at full load
Maximum Speed:  45 knots (83 kph)
Armament:      57mm gun
Torpedoes
Anti-aircraft missiles
Anti-submarine missiles
Aircraft:  2 SH-60 Seahawk helicopters
The commissioning ceremony will be a once in a lifetime event for Detroiters. Commissioning the ship, the act of placing the ship in service and authorizing it to join the fleet, is a time honored tradition dating back to 1775, before the United States officially existed. The commissioning event will be a week of activities on the Detroit waterfront, beginning with the arrival of the ship from the builder’s yard in Marinette, Wisconsin. There will be numerous receptions and events, ending with the commissioning ceremony, which will include distinguished speakers and the crew boarding the ship to “bring it alive.” Once the ceremonies are over, USS Detroit is scheduled to sail to the Pacific coast through the Panama Canal to join the Pacific Fleet in San Diego. After that the ship is expected to operate throughout the Pacific Ocean and its littorals.

To learn more about USS Detroit you may visit www.ussdetroitlcs7.com, where you can request invitations to the commissioning ceremony and click the link to the http://www.ussdetroitwebstore.com/ to purchase official USS Detroit items, such as apparel, coins and ball caps. The commissioning ceremony is currently scheduled for late October. Exact date will be released soon.

Bill Gripman is the managing partner of Drive Consulting Group LLC, a firm that is reinventing continuous process improvement through implementation of the Gripman Method. He is a member of the USS Detroit commissioning committee and chairs the Gifts sub-committee.

Important Updates Regarding the 2020 Version of the Civics Test