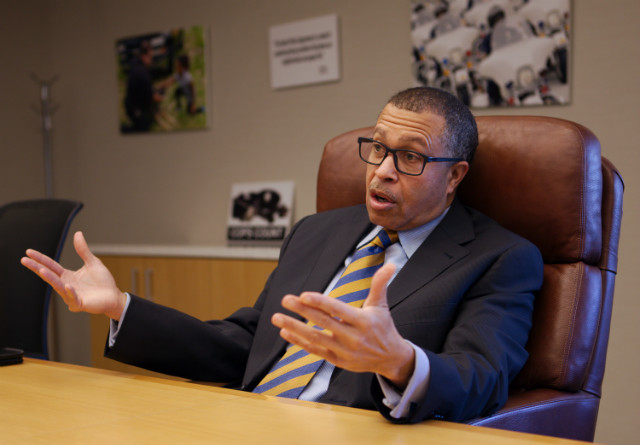 Enter Detroit Chief of Police James Craig, the hometown hero who launched his career in law enforcement 36 years ago with the DPD’s 10th Precinct.  Forced to relocate due to department layoffs in 1981, Craig’s career took him to Los Angeles where he steadily rose through the ranks of the LAPD over a 28 year period.  During his tenure as a command officer of the LAPD, Craig was responsible for overseeing some of the most violent areas in Los Angeles and achieved significant reductions in crime and prioritized developing strong partnerships between the police and the community at large.  2009  brought Craig to the police department of Portland, Maine where his tenure led to significant organizational change and successfully implemented community policing strategies.  On July 1, 2013, Chief James Craig was sworn in as the 42nd Chief of Police since the Department’s inception 148 years ago.  His contract has since been renewed for another two-year term.  Highlights of his time in office include the scrapping of unpopular “virtual precincts” and a restoration of 24-hour service to all police stations and the launch of COMPSTAT, with the DPD turning its focus to data-driven crime-fighting.  His three years in office have also seen a sharp drop in both homicides and violent crime in Detroit.  Last year saw 295 people killed in the city, the fewest number of homicides since 1967.

Chief Craig is proud to introduce a new initiative to the streets of the Motor City this year with the launch of Project Green Light, a partnership between local businesses, the City of Detroit and community groups.  With the first phase of the pilot program coming to an end on February 29th, Craig is feeling optimistic about the initiative.  “The idea of Greenlight started two years ago and it’s certainly at a whole different level now.  Initially, I heard a lot of concerns from people in the neighborhoods who felt left out of some of the initiatives city-wide.”  Aware of the successful implementation of the Quicken Loans-sponsored Blue Light public safety system installed in Detroit’s downtown and midtown neighbourhoods, Craig was intrigued by Homeland Security’s recognition of the program as a “best-practice” initiative.  “I started thinking about it.  What does the blue light represent?  Safe havens.  A place that people can go if they need assistance.  A location of safety.  I thought that if we could identify some gas stations that were clean, that were safe, that were welcoming locations for safety, then why not elicit support and work closely with those businesses in the neighborhoods,”  Asked to summarize Project Green Light, Craig is succinct. “In a nutshell, private business owners who have said that they want to participate make the financial investment of between $5000 and $6000.  They connect their high-definition cameras into our real-time crime center.”  Craig goes on to explain that in the event of a robbery in progress, a Project Green Light partner makes a 911 which is sent to a 24/7 monitoring center. Monitoring staff check the video of the location then send descriptions of the suspects out in real time on the dispatch of the responding units.

Looking to the future, Chief Craig thinks there more potential benefits to the program.  “As we evolve, as we tap into other video cameras across the city, there’s something I’m calling virtual patrol.  Let’s say there are criminal activities occurring on a major thoroughfare where we know there are cameras.  We know that there have been a rash of robberies on, let’s say, 7 and 10 on Thursdays and Fridays.  Virtual patrol is nothing more than going to that location, scanning the area and looking for criminal activity based on descriptions which we’ve gotten.  If during this virtual patrol our staff is monitoring some cameras at the location and they see some activity, or someone matching a description, they can then notify uniformed officers to go there and initiate an investigative stop for what they’ve seen.”  The implementation of the program has seen Mayor Mike Duggan’s office and the DPD working closely.  “As the Mayor and I started to talk about some of the initiatives we had going, one of the things that he knew I was passionate about was a real-time crime center.”  Mayor Duggan and Chief Craig agreed that real-time technology could be implemented in participating Project Green Light business. According to Chief Craig, “That’s when the birth of the true private-public partnership began.”

Although it’s difficult to determine whether we are seeing the beginning of a new era for policing in the city, the DPD’s current representation at the top, and it’s focus on positive community relations, stands in sharp contrast to the racially-charged controversies of the New Bethel Incident and the chaos and violence that ruled Detroit during the apex of the STRESS program.  If the success of the current African-American Chief of Police and the promise and potential of Project Green Light are any indication, the future indicates a more professional, tech-savvy police force for the city and a safer, better place to live for its citizens.  Detroit, however, remains one of the most dangerous cities in the country, a reality controlled by economic and social forces far outside the Detroit Police Department’s or Chief Craig’s power or authority.