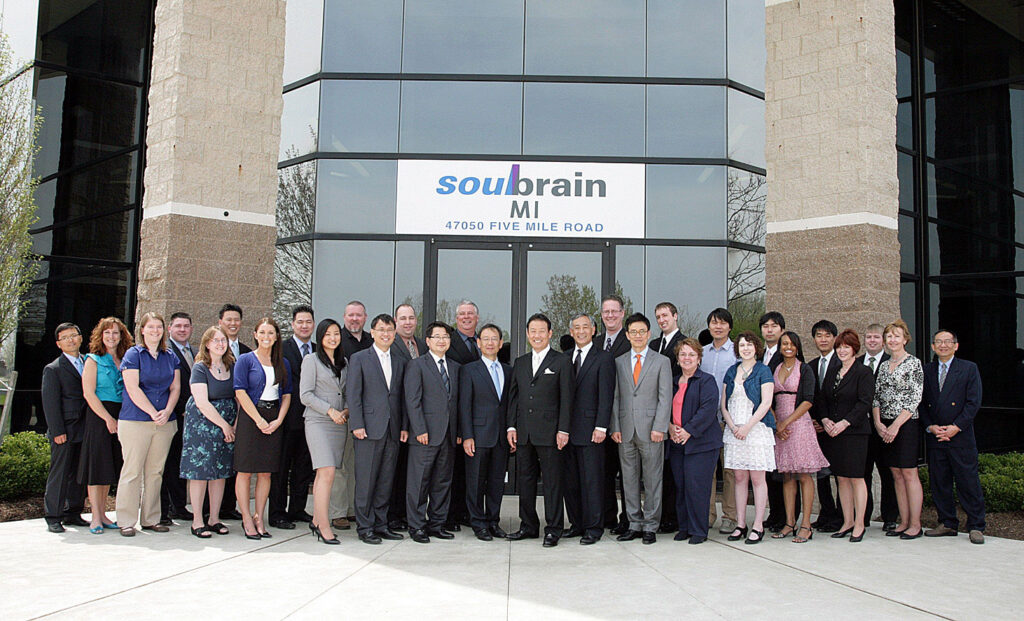 soulbrain MI Inc. invested $30 million to start a plant from a 10-year-old vacant building in Northville two years ago. soulbrain MI Inc. is a manufacturer of electrolyte – critical component of lithium ion battery.
soulbrain’s first name was TSC Michigan, which was named after its parent company in South Korea, TechnoSemiChem Co. Ltd. The name changed to soulbrain MI in May of this year. Soul is a homonym with Seoul, the capital city of Korea. The new name soulbrain MI is indeed ‘Seoulbrain in Michigan’.

He brought all the tanks and pipes as well as necessary hardware and software from Korea to install in the plant. It was like bringing in 10-year-advanced technology into Michigan.

soulbrain MI is growing in the state of Michigan, which claims it to be the world center of battery industry. Chief Executive Officer Allen S. Ibara expects revenue to be between $40 million and $70 million in 2012.  “We hired 25 degreed engineers last year. We will double the number by the end of this year. As we grow, we will eventually expand up to more than 200 engineers in five years” said Ibara.

However it is not an easy task to find right candidates in Michigan. “Simply because the technology we are dealing with does not exist in North America. We find new grads in chemical engineering, chemistry, material science from local universities, such as University of Michigan, Michigan State University and Wayne State University, but we need to send them to Korea so they can learn the new process,” Ibara said.

“Many students think they are done with learning after their graduation, but it is not what they learned in American universities”. Ibara is looking for candidates who are willing to adapt themselves to cope with new technology and those who do not frustrated to deal with something new.

Korean and Japan started researches in advanced battery 10 years ago. They are far advanced than USA. As a result, Ibara needs to bring some foreign talents to fill up the positions because he cannot find the right ones anywhere in US. In such a case, he has to go through tough immigration processes to get H-1 visa for his employees. “I mean it, it’s tough and tiresome”, he added. After they arrive here, getting driver’s license is another hill to go over. “It is not foreigner-friendly. Even though they are legally here to work, it is a very slow and inconvenient process to get driver’s licenses”, said Ibara.

Michigan can be the state as the center for automotive battery manufacturing. Michigan can manufacture not only the electrical vehicle but also the heart of it – advanced lithium-ion battery. “To make the real center of the industry, Michigan needs to make more international-friendly environment”, said Ibara.

Ibara is satisfied with current location because it is close to major highways and airports. However, he experienced technical difficulties to set up the new plant. The internet speed was so slow that he had to install fiber wires for himself. As a foreigner, he had hard time setting up a business because there was no business landing service.

“It was not easy opening a business checking account, getting the enough electrical power, contacting water department and obtaining construction permits. I couldn’t find any temporary office before opening this site. Start-up incubator is something necessary,” Ibara said. Even though such a service is available through Techtown, he was not aware of it when he needed the service the most.

Michigan is a good place for Ibara. “Because it has a good infrastructure; good schools for the kids of my employees, low cost of living and less congested traffic,” he added. If he has enough power to change one thing in Michigan, it’s cold weather in winter. As a former Californian, the first winter in Michigan was so harsh. “…but it is better than hurricane or earthquake to live with”, he is becoming a true Michigander as the third winter is approaching.