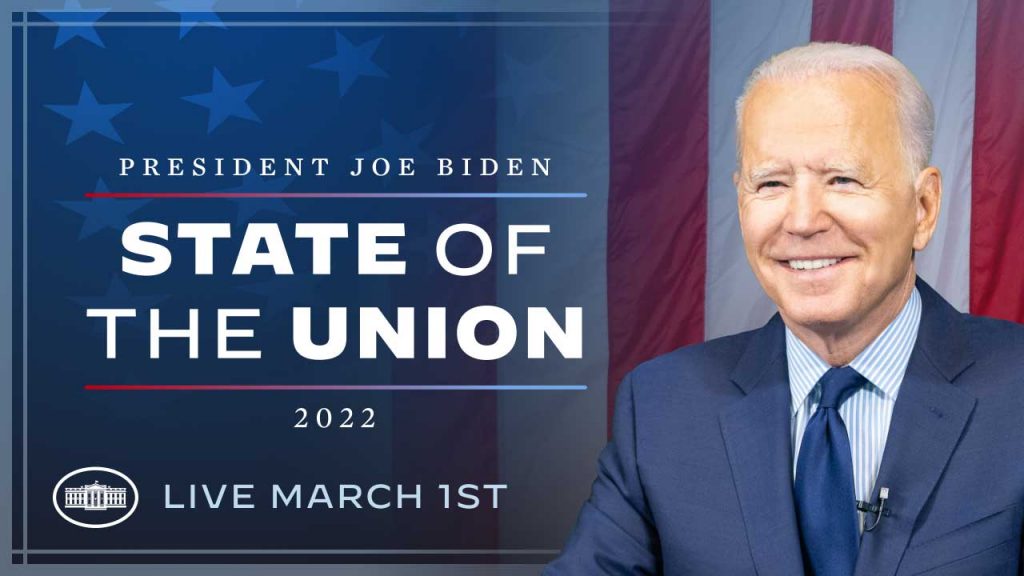 Biden’s First State of the Union Address: America is Stronger Than a Year Ago

US President Joe Biden, in his first State of the Union address after taking office on the 1st, emphasized support for Ukraine and reaffirmed his commitment to strong sanctions with allies against Russia’s aggression. “Korea” was mentioned once as a country participating in sanctions and response, but the North Korean issue was not specifically mentioned.

Vice President Kamala Harris (left) and House Speaker Nancy Pelosi stand ovation during the first State of the Union address delivered by US President Joe Biden (center) at a joint meeting of the House of Representatives on the 1st.

Vice President Kamala Harris (left) and House Speaker Nancy Pelosi stand ovation during the first State of the Union address delivered by US President Joe Biden (center) at a joint meeting of the House of Representatives on the 1st.

President Joe Biden, in his first State of the Union address at a joint meeting of the House and Senate since taking office on the 1st, will emphasize the unity of the alliance against Russia’s invasion of Ukraine and defend NATO member states. said.

He also declared that it would win the industrial competition with China and other countries around the world by putting the U.S. economy on a growth trajectory while overcoming the novel coronavirus outbreak.

President Biden first mentioned the invasion of Ukraine in his speech that day, saying, “Six days ago, Russia’s Vladimir Putin (President) sought to shake the foundations of the free world.”

However, he said the invasion was a “serious miscalculation” and that “he [Putin] ran into a wall of power he never imagined.”

“The fearless courage and fighting spirit of President Volodymyr Zelensky and all Ukrainians has inspired the world,” he said in the face of the invasion. I did,” he praised.

“The United States is with the Ukrainian people,” he said.

Immediately after Biden’s remarks, Ukraine’s ambassador to the United States, Oksana Markarova, sat in the audience and hugged the president’s wife, Jill Biden.

President Biden proposed to the audience, “Let’s stand up and show that America is with the people of Ukraine,” and attendees responded.

“Putin is not right” denounces the invasion

President Biden condemned Putin’s attack on Ukraine, saying it was “planned in advance and cannot be justified.”

“We have learned from history that dictators create more chaos when they don’t pay for their attacks,” he said.

The United States, along with its allies, “is united in the fight against Putin,” Biden said.

In this process, we list the names of our allies, including South Korea. President Biden explained that “the United Kingdom, Canada, Japan, South Korea, Australia, New Zealand and Switzerland, along with 27 EU member states, such as France, Germany and Italy, are joining the response.”

Closed US airspace to Russian aircraft

President Biden said the US, along with these allies, is putting strong pressure on Russia, and discussed sanctions on central banks and sovereign wealth funds. It said that “Putin’s $630 billion of war money has become obsolete.”

It also said it had pulled Russian banks out of the international financial system, citing an agreement to block the International Association of Interbank Telecommunications (SWIFT) payment networks.

In such a situation, he said, “The only person to be blamed is Putin,” he said, saying that the economic damage is already happening, such as the depreciation of the Russian ruble and the decline in the Russian stock market.

At the same time, President Biden announced that US airspace would be closed to all Russian aircraft.

“Putin is more isolated in the world than ever,” Biden said.

President Biden also warned that “Putin may benefit from the battlefield, but it will continue to pay a high price in the long run.”

“As history records the present, Putin’s wars will make Russia weaker and the rest of the world stronger,” he said.

“Protect up to 1 inch of NATO territory”

President Biden has said that US troops will never go to fight in Ukraine.

However, he said, “I make it clear that if Putin decides to move further west, he will defend the territory of NATO allies by an inch.”

In addition, the United States and its allies announced that they would release 60 million barrels of oil reserves to counter the recent surge in international oil prices due to the recent crisis in Ukraine.

Emphasis on economic recovery in response to the corona crisis

The Corona crisis was the most talked about issue in the United States.

President Biden said that many American families suffered economic hardship during the pandemic, and evaluated that various stimulus measures implemented since the inauguration of the new government are helping households and have a positive effect on the national economy.

In particular, he said 6.5 million jobs were created in the past year, the highest number for a single year in US history.

In addition, he presented the infrastructure (infrastructure) reconstruction project as a priority task and said he thanked the politicians who worked hard on the relevant legislation, including the opposition Republican Party.

Confidence in responding to inflation and competing with the Chinese economy

Regarding inflation, President Biden said: “One way to fight inflation is to lower wages and make Americans poorer, but I have a better plan.”

President Biden emphasized that these efforts will put the United States on the trajectory of winning the global economic competition in the 21st century.

In particular, he expressed confidence in economic competition with China, saying, “I told Xi Jinping that it was not a good bet to stand up against the American people.”

“We are stronger than a year ago, and we are one America, one people,” President Biden said at the end of his speech.

Most of the audience took off their masks to attend

President Biden’s speech, which lasted less than an hour, was broadcast worldwide on major TV channels and online.

Vice President Kamala Harris and House Speaker Nancy Pelosi listened to President Biden’s speech from behind the podium, side by side.

In accordance with the recent easing of guidelines from the US health authorities, most of the on-site audiences, including members of the House and Senate, cabinet members, and key figures in the judiciary, came to the Capitol without wearing a mask.

U.S. President Joe Biden (left) shakes hands with Chief Justice John Roberts as he enters the plenary chamber of Congress for his first State of the Union address on the 1st.
However, personnel gathering at the site have undergone PCR testing, the congressional office said.

Many lawmakers wore attire and accessories that included the blues and yellows that make up the Ukrainian flag to show their support for Ukraine, which had been invaded by Russia.

The first official State of the Union address by the President of the United States is usually held in the year following his inauguration. President Biden delivered a speech at a joint meeting of the House and Senate on April 28 last year, one day before the 100th day of his inauguration.