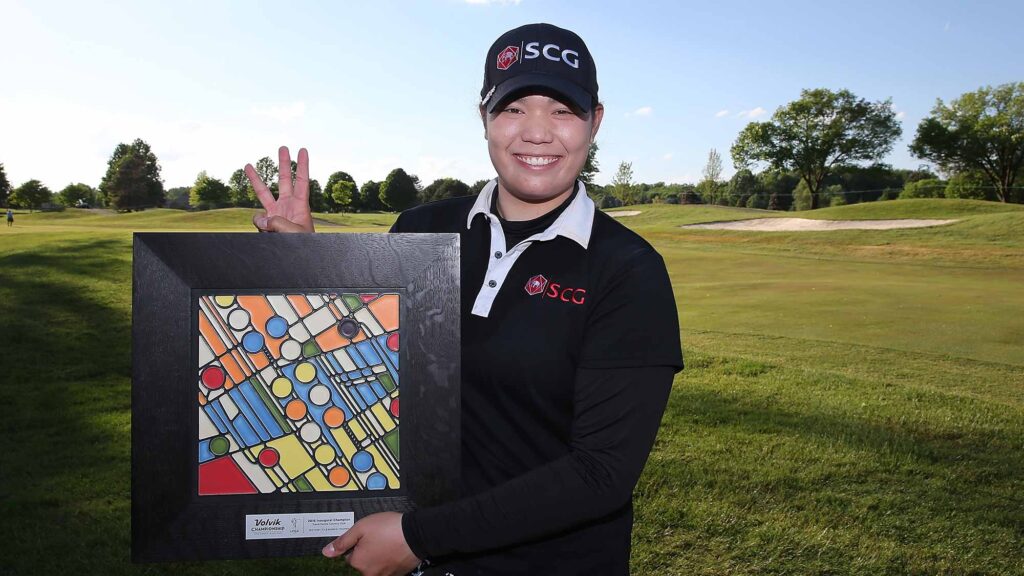 May belongs to Ariya Jutanugarn.

On Sunday at the LPGA Volvik Championship, Jutanugarn made history as the first player on the LPGA Tour to make her first three victories on Tour in consecutive events. She swept the entire month of May on the LPGA Tour, winning all three events staged on Tour including her maiden victory at the Yokohama Tire LPGA Classic, the Kingsmill Championship and now this week’s inaugural event in Michigan.

Ironically nicknamed May, in her home country of Thailand, Jutanugarn carded a final round 67 to win by five-strokes at 15-under par, five strokes clear of her nearest competitor, Christina Kim. Jutanugarn is the first since Inbee Park in 2013 to win three consecutive events on Tour.

One of the longest hitters on Tour, Jutanugarn didn’t hit driver all week due to the course layout at Travis Pointe Country Club. But she was still able to use her length to her advantage when she needed it most. It was her ability to make eagle at the par 5, 18th hole on Saturday that gave her the outright lead entering Sunday’s final round, two-strokes ahead of Jessica Korda and Christina Kim.

“I mean, when I see the course, I just feel like it’s really hard for me because I can’t hit my driver and I really have to have a good game plan,” said Jutanugarn. “So to be honest, first time I see it, I think this course is hard and I don’t think I’m going to win, I just really want to do my best.”

Both Kim and Korda were able to pull within one stroke of Jutanugarn over the course of Sunday’s final round before dropping shots on the back nine. Their chances continued to fade as Jutanugarn made back-to-back birdies at the par 4, 13th and par 5, 14th holes to extend her lead to four and essentially locked up the win. She remained aggressive on the closing stretch, picking up two more birdies to cruise to a five-stroke victory on Sunday for her largest margin of victory this month. Her prior two wins were each clinched by just one-stroke.
With a birdie at the 72nd hole Christina Kim moved into solo second at 10-under par, carding a final round one-under par, 71. She held the first round lead with the low round of the Tournament, carding an eight-under par 64 on Thursday.
“Yeah, it was an interesting round.  I knew in my head, I said if I get to 6 under on the day today, I can at least have a chance to battle it out with Ariya.  And I was a little off mark, but I mean, I went out there and I played my best,” said Kim. “I probably made, God, what, like 15, 16‑foot of putts in the last like four holes.  I made some really good up‑and‑downs and I had a lot of really good swings.  At the end of the day I know that I played my best.”
Her runner-up finish is both her best finish of the year and best since her victory at the 2014 Lorena Ochoa Invitational.

Jessica Korda and Brooke Henderson finished at nine-under par and in a share of third place. Henderson made a late charge on Sunday, vaulting her way into a share of second with a final round four-under par, 68. It’s the 10th worldwide top-10 of the year for the Canadian.
“Yeah, overall it was a solid week,” Henderson told the media. “It’s always nice to see your name up near the top of the leaderboard and it’s been a few weeks since that happened for me, so today was definitely a solid day for me.  I missed some opportunities, but I also made up for a couple here on the back nine, so overall I’m happy.”

Korda was paired with Jutanugarn in the final group on Sunday and posted an even par, 72 to finish the day where she started at nine-under par for the championship and was left in awe at her playing partner’s performance.
“No, I mean, it’s great.  I’m speechless.  That was amazing.  I definitely didn’t see, what, 5 under she shot?  I didn’t see 5 under there when we started the day,” Korda told the media. “Honestly, she putted so well today.  It wasn’t easy, greens were a little bit bumpy.  She made it look so easy.”

Belen Mozo began the final round within striking distance of the lead, five-strokes back of Jutanugarn. But she wasn’t able to make up enough ground to catch her on Sunday, posting a two-under par, 70 to finish solo fifth at eight-under par for the week, her best finish of the year.

Play was briefly suspended during the afternoon due to lightning at the area beginning at 3:22 p.m. ET. The final round resumed at 4:12 p.m.
Click here for complete scores from the final round of the LPGA Volvik Championship.